DTN News: French Warships For Russia To Be Armed With Ka-52 Helicopters 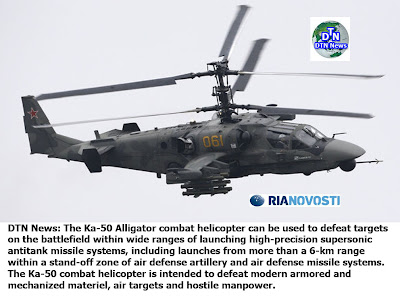 d with Russian Ka-52 Alligator helicopters, Air Force Commander Colonel General Alexander Zelin told the Ekho Moskvy FM station on Saturday.
He emphasized that the Ka-52 Alligator helicopters are very advanced and are equal to best foreign models.
The Ka-52 is armed with 30-mm cannon, Vikhr (Whirlwind) laser guided missiles, rockets, including S-24s, as well as bombs.
The Ka-52 is a modification of the basic Ka-50 Hokum model. The development of the Ka-52 started in 1994 in Russia, but its serial production began only in 2008.
The helicopter is also equipped with two radars, one for ground and one for aerial targets and a Samshite nighttime-daytime thermal sighting system.
Russia is negotiating the purchase of at least one French-built Mistral-class amphibious assault ship and plans to build three more vessels of the same class in partnership with the French naval shipbuilder DCNS.
A Mistral-class ship is capable of transporting and deploying 16 helicopters, four landing barges, up to 70 armored vehicles including 13 battle tanks, and 450 personnel.
The Russian military has said it plans to use Mistral ships in its Northern and Pacific fleets.
Many Russian military and industry experts have questioned the financial and military sense of the purchase, and some believe that Russia simply wants to gain access to advanced naval technology that could be used in the future in potential conflicts with NATO and its allies.
In April, the head of the Federal Service for Military and Technical Cooperation, Mikhail Dmitriev, said the Mistral deal would be concluded by the end of the year.
Related News
*Russia to define Mistral purchase scheme - Navy
*Russia set to buy Mistral with transfer of French technologies
*Russian Air Force to get dozens of helicopters if Mistral deal agreed
*PTC seeks role in adapting Mistral for Russian Navy
Multimedia
*France’s Mistral amphibious assault ship visits St. Petersburg
*France's Mistral amphibious assault ship
*Putin says purchase of Mistral warship is a good deal for France
Posted by DEFENSE NEWS at 10:25:00 AM