Defense News: DTN News - NATO SUMMIT IN CHICAGO:  Barack Obama Snubs Asif Ali Zardari At NATO
*U.S. has dole out over $100 billion to Pakistan since 1950 with zero gain and multifaceted problems>Five Decades of Aid to Pakistan, 1950 - 2001It is not much of an exaggeration to state that since independence in 1947, Pakistan has been an aid-dependent nation. Some estimates suggest that the gross disbursement of overseas development assistance to Pakistan from 1960 to 2002 (in 2001 prices) was $73.1 billion, from both bilateral and multilateral sources.Almost 30 percent of this official development assistance came in the form of bilateral aid from the United States, the largest single bilateral donor by far.>U.S. Financial aid to Pakistan since 9/11Between 2002-2010, Pakistan received approximately 18 billion in military and economic aid from the United States. In February 2010, the Obama administration requested an additional 3 billion in aid, for a total of $20.7 billion.Western officials have claimed nearly 70% ( roughly $3.4 billion) of the aid given to the Military assistance has been misspent in 2002-2007 and used to over Civilian Deficit. However U.S-Pakistani relationship has been a transactional based and U.S military aid to Pakistan and aid conditions has been shrouded in secrecy for several years until recently . In a startling revelation, an update released says that US funding to Pakistan has more than doubled since President Obama took office in 2009. In fiscal 2010 US gave nearly $4.3 billion to Pakistan, up from about $3 billion in 2009 and $2 billion in 2008. The US fiscal year runs from October to September.>As of May 21, 2012 - Is Pakistan an opportunistic or a greedy countryIn an unmistakable snub, President Barack Obama left Pakistan off a list of nations he thanked Monday for help getting war supplies into Afghanistan and refused to meet Mr Zardari yesterday in the midst of Pakistan's refusal to compromise over increasing the fee for trucks to pass through its territory to Afghanistan from $US250 ($253) to $US5000 almost two-thousand percent increase. Now, Pakistan has lost its credibility globally as a reliable or a dependable ally to fight or to stamp out terrorism and militancy.

Source: DTN News - - This article compiled by Roger Smith from reliable sources BY: BRAD NORINGTON, WASHINGTON CORRESPONDENT From: The Australian(NSI News Source Info) TORONTO, Canada - May 21, 2012: BARACK Obama has snubbed Pakistani President Asif Ali Zardari despite inviting him to a NATO summit in Chicago, as a bitter dispute rages over supply routes that could disrupt the planned US troop withdrawal from Afghanistan. 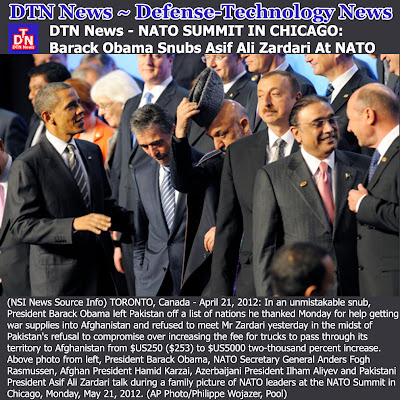 The US President refused to meet Mr Zardari yesterday in the midst of Pakistan's refusal to compromise over increasing the fee for trucks to pass through its territory to Afghanistan from $US250 ($253) to $US5000.
Pakistan closed its borders and then demanded the huge price rise for moving US supply trucks through its territory after US air strikes killed 24 Pakistani soldiers in November.
Mr Zardari was invited to the NATO talks at late notice and US officials appear to have hoped a settlement of the transportation issue could have been reached before his arrival.
Instead, the conflict worsened yesterday.
It was made clear that Mr Obama was unwilling to meet Mr Zardari, and the diplomatic task was handed to US Secretary of State Hillary Clinton.
The dispute with Pakistan has forced unacceptable costs on the US as trucks transporting up to 40 per cent of equipment to and from Afghanistan have been forced to use a longer route through Russia, Kazakhstan and Uzbekistan.
The US insists strikes that killed Pakistani soldiers were accidental because the troops concerned appeared hostile.
It has also refused to issue a full apology, which has been demanded by Pakistan.
The rise in Pakistan's fee per truck is not only considered unreasonable retaliation but also a potential stumbling block as Washington draws up plans for withdrawing large amounts of military equipment from Afghanistan for a planned troop withdrawal by the end of 2014.
The argument over transportation fees is only the latest flare-up in relations. It follows US doubts about Pakistan's loyalty and its alleged double-dealing with the Taliban and insurgent groups considered terrorists.
The US still suspects senior Pakistani intelligence officials knew al-Qa'ida leader Osama bin Laden was hiding in a town with one of the country's largest military barracks for five years when Mr Obama ordered a commando raid on his hideout last year.
Meanwhile, the Pakistani government resents the unauthorised raid on its territory.
The US President yesterday met Afghanistan President Hamid Karzai at the NATO summit in Chicago.
The pair discussed plans to wind down the war and hand security to local forces while maintaining an American military commitment for a decade after the official 2014 withdrawal.
Using words similar to those for Australian Prime Minister Julia Gillard, Mr Karzai thanked Mr Obama for "taxpayers' money" used to support his country as the US pledges continued support for an Afghan military after the official foreign troop withdrawal at a cost of $US4 billion a year.
Under the withdrawal schedule, local Afghan forces are meant to be responsible for the country's security by mid-next year.
All combat troops are to be withdrawn by the end of 2014.
Administration officials said yesterday that the invitation to Chicago for Mr Zardari had not come from Mr Obama personally but through NATO.
*Link for This article compiled by Roger Smith from reliable sources BY: BRAD NORINGTON, WASHINGTON CORRESPONDENT From: The Australian*Speaking Image - Creation of DTN News ~ Defense Technology News *This article is being posted from Toronto, Canada By DTN News ~ Defense-Technology News Contact:dtnnews@ymail.com ©COPYRIGHT (C) DTN NEWS DEFENSE-TECHNOLOGY NEWS
Posted by DEFENSE NEWS at 9:56:00 AM