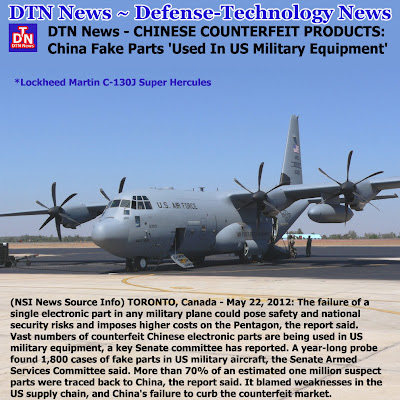 A year-long probe found 1,800 cases of fake parts in US military aircraft, the Senate Armed Services Committee said.
More than 70% of an estimated one million suspect parts were traced back to China, the report said.
It blamed weaknesses in the US supply chain, and China's failure to curb the counterfeit market.
The failure of a key part could pose safety and national security risks and lead to higher costs for the Pentagon, the committee said.
US servicemen rely on a variety of "small, incredibly sophisticated electronic components" found in night vision systems, radios and GPS devices and the failure of a single part could put a soldier at risk, the report said.
It highlighted suspect counterfeit parts in SH-60B helicopters used by the Navy, in C-130J and C-27J cargo planes and in the Navy's P-8A Poseidon plane.
After China, the UK and Canada were found to be the next-largest source countries for fake parts.
'Avoiding scrutiny'
The committee criticised China for failing to shut down counterfeit manufacturers and said that committee staff wanting to travel to China for the investigation had not been granted visas.
"Counterfeit electronic parts are sold openly in public markets in China," the report said.
"Rather than acknowledging the problem and moving aggressively to shut down counterfeiters, the Chinese government has tried to avoid scrutiny," it added.
But the report said that use of Department of Defense programmes such as the Government-Industry Data Exchange Program (GIDEP), designed to log suspected fake parts, were "woefully lacking".
Between 2009 and 2010 the GIDEP only received 217 reports relating to suspected fake counterfeit components, the majority of which were filed by just six companies, it said. Only 13 reports came from government agencies.
The report also said that in some cases the US defence department had reimbursed contractors for the costs they incurred as a result of their failure to spot fake components in their own supply chain - giving companies no incentive to weed out counterfeits themselves.
But it praised the National Defense Authorization Act, signed into law on 31 December 2011 by President Barack Obama, which aims to stop counterfeit parts from entering the country and would cut down on sourcing components from unknown suppliers.
The report's focus on China comes as the US is beginning the task of "pivoting" its defence strategy towards the Asia-Pacific region.
The Pentagon is also preparing to absorb about $450bn (£285bn) of cuts over the next decade.
But it could face cutbacks of a further $500bn if mandatory across-the-board spending cuts come into effect at the end of 2012, after Congress failed to reach a deficit reduction plan last year.
*Link for This article compiled by Roger Smith from reliable sources BBC World News*Speaking Image - Creation of DTN News ~ Defense Technology News *This article is being posted from Toronto, Canada By DTN News ~ Defense-Technology News Contact:dtnnews@ymail.com ©COPYRIGHT (C) DTN NEWS DEFENSE-TECHNOLOGY NEWS
Posted by DEFENSE NEWS at 9:55:00 PM