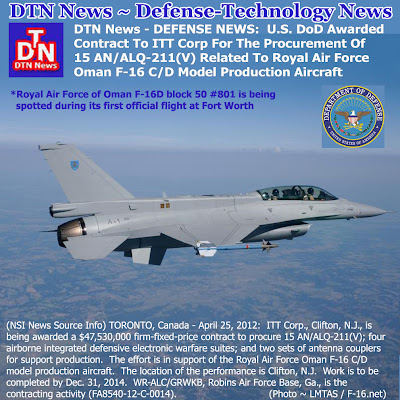 On October 4th, 2001, the Defense Security Cooperation Agency notified Congress of a possible Foreign Military Sale of F-16C/D fighters and associated weapons, equipment and technical and logistical support to Oman. The Government of Oman wanted to purchase 12 F-16C/D Block 50 aircraft. The estimated cost of the total deal is $1.1 billion, if all options are taken.In May 2002, the Sultanate of Oman signed an agreement with the U.S. government to purchase 12 Advanced Block 50 F-16s in the Peace A'sama A'safiya (Clear Skies) Foreign Military Sales (FMS) program. The agreement includes eight single-seat F-16Cs and four two-seat F-16Ds, powered by the General Electric F110-GE-129 engine.On August 4th, 2005, the the Royal Air Force of Oman accepted the first F-16 at Lockheed's Fort Worth facilities. The first Oman F-16 is a two-seat F-16D model and was accepted by the U.S. government (as agent for Oman in the FMS process) on July 19, 2005, one month ahead of schedule. The first single-seat F-16C version flew in August 2005 and was accepted in September. These two aircraft were ferried to Oman in mid- October 2005 to support the 35th National Day celebrations on November 18th. The remainder of the aircraft will be ferried to Oman during 2006.
Follow on buy
On August 3rd, 2010 a new order for another 18 F-16s was announced. Final contract negotiations have to be concluded before this order gets a green light. Eventually, on December 14th, 2011 it was announced that a further order of 12 F-16s was imminent, compromising 10 C-models and 2 D-models. The program is worth $600 million and will be concluded by 2016.
*Link for This article compiled by Roger Smith from reliable sources DTN News / U.S. DoD issued No. 307-12 April 25, 2012*Speaking Image - Creation of DTN News ~ Defense Technology News *This article is being posted from Toronto, Canada By DTN News ~ Defense-Technology News Contact:dtnnews@ymail.com ©COPYRIGHT (C) DTN NEWS DEFENSE-TECHNOLOGY NEWS
Posted by DEFENSE NEWS at 8:12:00 AM