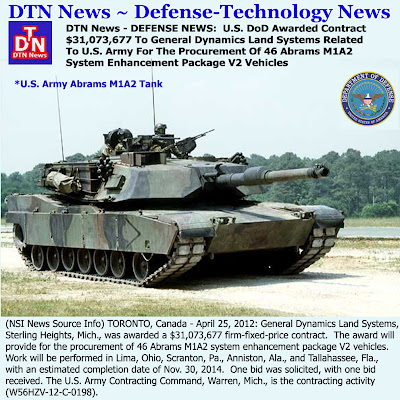 Work will be performed in Lima, Ohio, Scranton, Pa., Anniston, Ala., and Tallahassee, Fla., with an estimated completion date of Nov. 30, 2014.

One bid was solicited, with one bid received. The U.S. Army Contracting Command, Warren, Mich., is the contracting activity (W56HZV-12-C-0198).
The M1 Abrams entered U.S. service in 1980, replacing the M60 tank. It served for over a decade alongside the improved M60A3, which had entered service in 1978. The M1 remains the principal main battle tank of the United States Army and Marine Corps, and the armies of Egypt, Kuwait, Saudi Arabia, Australia, and Iraq in 2010.Three main versions of the M1 Abrams have been deployed, the M1, M1A1, and M1A2, incorporating improved armament, protection and electronics. These improvements, as well as periodic upgrades to older tanks, have allowed this long-serving vehicle to remain in front-line service. The M1A3 is currently under development.The M1A2 was a further improvement of the M1A1 with a commander's independent thermal viewer, weapon station, position navigation equipment, and a full set of controls and displays linked by a digital data bus. These upgrades also provided the M1A2 with an improved fire control system. The M1A2 System Enhancement Package (SEP) added digital maps, FBCB2 capabilities, and an improved cooling system to compensate for heat generated by the additional computer systems. The M1A2 SEP also serves as the basis for the M104 Wolverine heavy assault bridge.
Further upgrades included depleted uranium armor for all variants, a system overhaul that returns all A1s to like-new condition (M1A1 AIM), a digital enhancement package for the A1 (M1A1D), and a commonality program to standardize parts between the U.S. Army and the Marine Corps (M1A1HC).The M1A2 SEP TUSK Abrams and a modernized M1 Abrams were included in the Ground Combat Vehicle (GCV) Analysis of Alternatives (AOA). Vehicles included in the AOA were determined to be inferior to the planned GCV. The U.S. Army Vice Chief of Staff Gen. Peter Chiarelli commended the M1 Abrams program and recommended a similar approach for the GCV program. The Ground Combat Vehicle family of vehicles is the planned successor to the M1 as well as many other U.S. Army vehicles. However, the Army anticipates that the M1A1 will remain in U.S. service until at least 2021, and the M1A2 to beyond 2050.M1 Abrams ~ Operators (Source - Wikipedia) *Link for This article compiled by Roger Smith from reliable sources DTN News / U.S. DoD issued No. 307-12 April 25, 2012*Speaking Image - Creation of DTN News ~ Defense Technology News *This article is being posted from Toronto, Canada By DTN News ~ Defense-Technology News Contact:dtnnews@ymail.com ©COPYRIGHT (C) DTN NEWS DEFENSE-TECHNOLOGY NEWS
Posted by DEFENSE NEWS at 8:00:00 AM