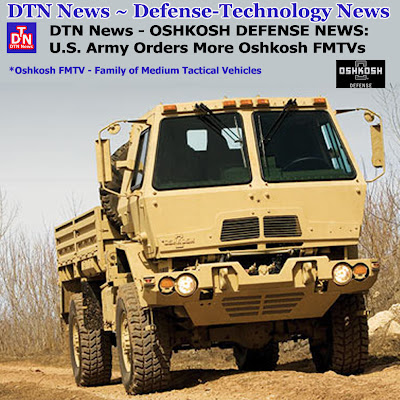 “Over the first three years of this five-year contract, we have delivered superior-quality trucks and trailers for soldiers for their combat operations, relief efforts and unit-resupply missions at home and abroad,” said Mike Ivy, vice president and general manager of Army Programs for Oshkosh Defense. “We will continue to offer fleet improvements by developing prototypes with upgraded technology, such as our TAK-4® independent suspension system that improves off-road mobility, ride quality and protection capabilities.”
Oshkosh Defense’s rigorous production and quality processes ensure on-time delivery of high-quality trucks and trailers. The FMTV is a series of 17 models ranging from 2.5-ton to 10-ton payloads. Vehicles have a parts commonality of more than 80 percent, resulting in streamlined maintenance, training, sustainment and overall cost efficiency.
This is the latest order under the five-year FMTV contract awarded to Oshkosh Defense for the production of trucks and trailers, as well as support services and training, through calendar year 2015. The order is valued at more than $294 million and deliveries are scheduled to be completed in February 2014.

About Oshkosh Defense
Oshkosh Defense, a division of Oshkosh Corporation, is an industry-leading global designer and manufacturer of tactical military trucks and armored wheeled vehicles, delivering a full product line of conventional and hybrid vehicles, advanced armor options, proprietary suspensions and vehicles with payloads that can exceed 70 tons. Oshkosh Defense provides a global service and supply network including full life-cycle support and remanufacturing, and its vehicles are recognized the world over for superior performance, reliability and protection. For more information, visit www.oshkoshdefense.com.
About Oshkosh Corporation
Oshkosh Corporation is a leading designer, manufacturer and marketer of a broad range of specialty access equipment, commercial, fire & emergency and military vehicles and vehicle bodies. Oshkosh Corporation manufactures, distributes and services products under the brands of Oshkosh®, JLG®, Pierce®, McNeilus®, Medtec®, Jerr-Dan®, Oshkosh Specialty Vehicles, Frontline™, SMIT™, CON-E-CO®, London® and IMT®. Oshkosh products are valued worldwide in businesses where high quality, superior performance, rugged reliability and long-term value are paramount. For more information, visit www.oshkoshcorporation.com.
®, TM All brand names referred to in this news release are trademarks of Oshkosh Corporation or its subsidiary companies.
Forward-Looking Statements
This press release contains statements that the Company believes to be “forward-looking statements” within the meaning of the Private Securities Litigation Reform Act of 1995. All statements other than statements of historical fact, including, without limitation, statements regarding the Company’s future financial position, business strategy, targets, projected sales, costs, earnings, capital expenditures, debt levels and cash flows, and plans and objectives of management for future operations, are forward-looking statements. When used in this press release, words such as “may,” “will,” “expect,” “intend,” “estimate,” “anticipate,” “believe,” “should,” “project” or “plan” or the negative thereof or variations thereon or similar terminology are generally intended to identify forward-looking statements. These forward-looking statements are not guarantees of future performance and are subject to risks, uncertainties, assumptions and other factors, some of which are beyond the Company’s control, which could cause actual results to differ materially from those expressed or implied by such forward-looking statements. These factors include the expected level and timing of the DoD’s procurement of products and services and funding thereof, including the impact of the DoD’s allocation of certain tires which will restrict and delay certain FHTV sales; risks related to reductions in government expenditures in light of U.S. defense budget pressures and an uncertain DoD tactical wheeled vehicle strategy; the cyclical nature of the Company’s access equipment, commercial and fire & emergency markets, especially during periods of global economic uncertainty, lower municipal spending and tight credit markets; the Company’s ability to produce vehicles under the FMTV contract at targeted margins; the duration of the ongoing global economic weakness, which could lead to additional impairment charges related to many of the Company’s intangible assets and/or a slower recovery in the Company’s cyclical businesses than equity market expectations; the potential for the U.S. government to competitively bid the Company’s Army and Marine Corps contracts; the consequences of financial leverage, which could limit the Company’s ability to pursue various opportunities; increasing commodity and other raw material costs, particularly in a sustained economic recovery; the ability to pass on to customers price increases to offset higher input costs; risks related to costs and charges as a result of facilities consolidation and alignment, including that anticipated cost savings may not be achieved; risks related to the collectability of receivables, particularly for those businesses with exposure to construction markets; the cost of any warranty campaigns related to the Company’s products; risks related to production or shipment delays arising from quality or production issues; risks associated with international operations and sales, including foreign currency fluctuations and compliance with the Foreign Corrupt Practices Act; the potential for increased costs relating to compliance with changes in laws and regulations; risks related to disruptions in the Company’s distribution networks; risks related to actions of activist shareholders; and the Company’s ability to successfully execute on its strategic road map and meet its long-term financial goals. Additional information concerning these and other factors is contained in the Company’s filings with the Securities and Exchange Commission. All forward-looking statements speak only as of the date of this press release. The Company assumes no obligation, and disclaims any obligation, to update information contained in this press release. Investors should be aware that the Company may not update such information until the Company’s next quarterly earnings conference call, if at all.
*Link for This article compiled by Roger Smith from reliable sources Oshkosh Defense*Speaking Image - Creation of DTN News ~ Defense Technology News *This article is being posted from Toronto, Canada By DTN News ~ Defense-Technology News Contact:dtnnews@ymail.com ©COPYRIGHT (C) DTN NEWS DEFENSE-TECHNOLOGY NEWS
Posted by DEFENSE NEWS at 10:33:00 PM