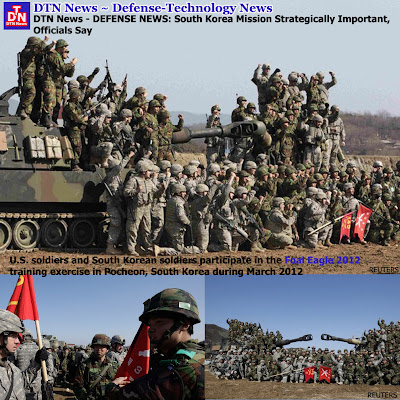 Peter Lavoy, acting assistant secretary of defense for Asian and Pacific security affairs, testified along with Army Gen. James D. Thurman, commander of U.S. Forces Korea, before the House Armed Services Committee in a hearing examining the security situation on the Korean peninsula.
“For over 60 years, the United States has maintained a presence on the Korean peninsula to deter aggression against … [South Korea] and to fight and win, should deterrence fail,” Lavoy said.
The U.S.-South Korean alliance continues to be a cornerstone of U.S. regional strategy, and department and military leaders will continue to strengthen that alliance, make U.S. forces there more efficient and effective, and enhance presence, power projection and deterrence in the region, he added.
Lavoy said North Korea's “provocative behavior” continues to present a serious threat to the United States, its allies, and the region. He noted that North Korea has a large conventional military and is pursuing ballistic missile and weapons-of-mass-destruction programs, including uranium enrichment.
In response to that threat, he said, the U.S. and South Korean governments and militaries are working to strengthen strategic capabilities, further integrate operations and work from an alliance perspective to meet current and emerging threats.
The two countries have a comprehensive plan under the Strategic Alliance 2015 framework to transition wartime operational control from the U.S.-South Korean combined forces command to the South Korean joint chiefs of staff by December 2015, Lavoy told the panel. The transition will allow South Korea to lead its national defense while maintaining an enduring U.S. defense commitment and capability, he said.
In line with the strategic agreement, U.S. forces will consolidate and relocate from the metropolitan area of the South Korean capital of Seoul to centralized locations south of the city, he said. The move will improve efficiency, reduce costs, and enhance force protection by placing most service members and equipment outside the effective range of North Korean artillery, Lavoy told the committee.
Thurman said the U.S.-South Korean relationship is “the finest military partnership I have experienced in my 37-year career.”
As the democratic, wealthier southern neighbor of a closed-off North Korea, Thurman said, South Korea faces the threat of attack or provocation that can come with little or no warning.

“Our deterrent capability is based on U.S. and [South Korean] military readiness, and this is my primary focus,” the general said. “I have conducted a thorough review, including two combined exercises, and I have determined our forces remain ready to defend the … Korean peninsula.”
Both militaries are well-equipped, well-trained and professional, Thurman said, while the alliance is strong and the U.S. presence provides a stabilizing influence in the region.
“I think just by having a forward presence, that is a calming effect,” he added.
His forces train to respond to chemical and biological as well as conventional weapons attacks, Thurman said, and work hand in hand with South Korean forces on cyber defense.
“I have come to realize that cyber is a key warfighting domain,” he said. “It is [as] important as our air, maritime and ground operations.”
Thurman said he would welcome productive talks between the United States and North Korea, “but my sense is the [approach they have] taken with their military-first policy is not going to change.”
Thurman said his force numbers and equipment are able to meet the mission, but he acknowledged he’d like to see some adjustments. While he has enough troops, the standard one-year tour junior service members serve in South Korea creates a “churn” of 600 to 700 men and women arriving or leaving each month, he said.
“So I have asked [Gen. Raymond T. Odierno, Army chief of staff] and the Army to look at how we can build readiness at best value, and see what we can do,” he said. “And I'm very mindful of the cost, and I don't want to create a requirement that is not operationally focused.”
The general said he’d also like to increase his air capabilities.
“We do not have a full combat aviation brigade there,” Thurman noted. “I have asked the department as well as the Department of the Army and back through [U.S. Pacific Command] and the Joint Staff to look at adding that battalion back that was repositioned out of there to meet requirements for the war in Iraq and Afghanistan.”
Thurman emphasized his forces feel a sense of satisfaction in their mission.
“I think what makes Korea unique is we have a threat to the north. We have a well-stated mission. And I have not seen a decline [in] any morale issues,” he said. “This requires active leaders, leaders that are sensitive to the needs of their service members. And that's where I put my effort in making sure that, if there [are] any quality-of-life issues, then we quickly try to resolve that.”
*Link for This article compiled by Roger Smith from reliable sources By Karen Parrish - American Forces Press Service*Speaking Image - Creation of DTN News ~ Defense Technology News *This article is being posted from Toronto, Canada By DTN News ~ Defense-Technology News Contact:dtnnews@ymail.com ©COPYRIGHT (C) DTN NEWS DEFENSE-TECHNOLOGY NEWS
Posted by DEFENSE NEWS at 10:38:00 PM