Source: DTN News - - This article compiled by Roger Smith from reliable sources By Navjot Kaur, The Motley Fool - Daily Finance(NSI News Source Info) TORONTO, Canada - March 7, 2012: Japan recently made its first public announcement that it may cancel its big order for Lockheed Martin's (NYS: LMT) F-35 fighter planes if the company adds to the pre-decided price or extends the delivery period of these planes. The cancellation can potentially wipe out more than $5 billion that Lockheed is expected to earn from the deal. 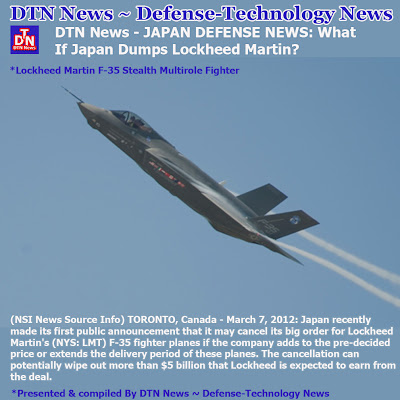 A flashback
After the death of North Korean dictator Kim Jong Il late in 2011, uncertainty and instability cropped up in the Korean peninsula, an area where 1.7 million troops from North Korea, South Korea, and the U.S. are stationed. In the wake of North Korea improving its ballistic missiles and both Russia and China developing stealth fighters, Japan -- with the world's sixth-largest defense budget -- also planned on improving its air defense network.
Japan placed an order to buy 42 F-35 fighter jets, costing between $114 million and $122 million per unit. This marked the F-35's first win in a competitive tender, as well as Japan's costliest fighter jet procurement. The company is expected to begin delivery of the planes in 2016, beginning with four jets.
F-35 program in troubleThe F-35 is expected to become the centerpiece of military forces in the U.S. and other countries. Lockheed Martin is supposed to develop 2,400 F-35s for the U.S. and other nations, helped by industry peers Northrop Grumman (NYS: NOC) and BAE Systems. However, the program has run into a series of cost overruns and delays.
Recently, Lockheed faced a delay in orders from the U.S. and some order cancellations from Italy, owing to defense budget cuts in those nations. This has effectively slowed down the company's production and reduced its ability to generate bulk orders for supplies, thereby increasing the cost per aircraft. In fact, the cost of this program has now increased to $385 billion from $233 billion earlier, and it may go up even further.
This means Lockheed will now have to charge a higher price per aircraft, and there is a chance of delay in delivery, as well.
The Japanese dilemmaGiven its uncertain economic condition and military buildup in neighboring countries, neither the delay nor the price hike will go down well in Japan. The Japanese military requires further confirmation and clarity on the cost and delivery details before summer, without which the country has threatened to cancel the F-35 order and look for a replacement instead. That's surely bad news for Lockheed.
What if Lockheed fails?Naturally, the other bidders for this contract stand to gain. Lockheed's F-35 jet was short-listed over two lower-cost, combat-tested aircraft, including Boeing's (NYS: BA) F-18 Super Hornet and Eurofighter GmbH's Typhoon fighter. Despite costing over $100 million per unit, the F-35 was selected because of its next-generation stealth design, which provides radar-evading facilities from the front and back of the aircraft.
The F-35s are supposed to replace Boeing F-4s, which were last assembled in Japan in 1981. In case Lockheed fails to clinch the deal, Boeing definitely has an edge over other competitors, as it is a tried-and-tested supplier of Japan's military requirements.
*Link for This article compiled by Roger Smith from reliable sources By Navjot Kaur, The Motley Fool - Daily Finance*Speaking Image - Creation of DTN News ~ Defense Technology News *This article is being posted from Toronto, Canada By DTN News ~ Defense-Technology News Contact:dtnnews@ymail.com ©COPYRIGHT (C) DTN NEWS DEFENSE-TECHNOLOGY NEWS
Posted by DEFENSE NEWS at 6:06:00 AM