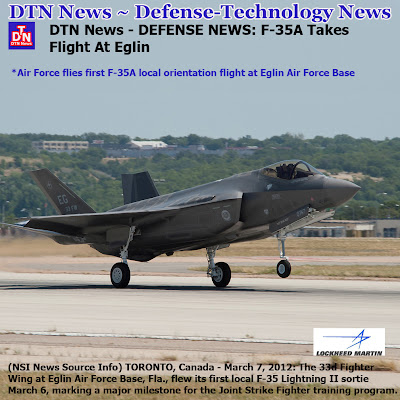 Piloted by U.S. Air Force Lt. Col. Eric Smith, Director of Operations for the 58th Fighter Squadron, the local orientation flight launched at 10:09 a.m. and included operational flight checks. An F-16 chase plane was piloted by Lt. Col. Lee Kloos, 58th Fighter Squadron Commander."Our first sortie is truly a milestone for the program," said Col. Andrew Toth, 33d Fighter Wing commander. "There has been a lot of preparation that has gone into this historic event. Our integrated training team members were truly excited to see the jet take off today."Early in the flight, F-16 chase pilots observed a small amount of fluid venting from the F-35 aircraft. The pilot, following standard operating procedures, returned the aircraft safely back to the base after an approximate 20 minute flight."The objective for today was to be able to launch an aircraft out, conduct an operational check flight with the system, get it out to the airspace and then bring that aircraft back safely and effectively and we achieved many of those objectives," said Col. Toth.
"Since F-35s arrived last summer, we've been conducting engine runs and taxi operations, maintenance training with instructors and virtual trainers, as well as developing pilot curriculum. We completed multiple successful small group tryouts on our training systems and will continue to improve those processes as we prepare for training."
The wing's two F-35 pilots, in conjunction with its integrated team of military members, civilians and contractors, will begin to slowly build up their number of sorties with an initial goal of flying twice a week for the first couple of weeks and then steadily increasing the weekly sortie count."I'm very pleased with the work that's been done by our entire team to bring us to this phase in the F-35 program," said Gen. Edward Rice Jr., commander of Air Education and Training Command, who approved F-35 flight operations to begin. "We continue to make steady progress towards our goal of standing up a world class training program at Eglin."The F-35 Integrated Training Center at Eglin AFB will be the benchmark for F-35 pilot and maintainers worldwide. The center includes pilot and maintenance training equipment, support, systems and facilities for all three aircraft variants and will train approximately 100 pilots and 2,200 maintainers annually.*Link for This article compiled by Roger Smith from reliable sources Lockheed Martin*Speaking Image - Creation of DTN News ~ Defense Technology News *This article is being posted from Toronto, Canada By DTN News ~ Defense-Technology News Contact:dtnnews@ymail.com ©COPYRIGHT (C) DTN NEWS DEFENSE-TECHNOLOGY NEWS
Posted by DEFENSE NEWS at 10:26:00 PM