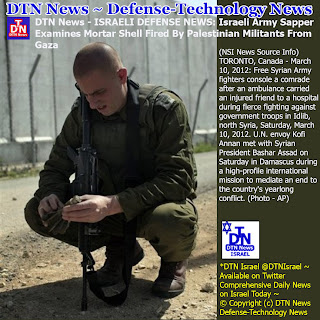 An IDF spokesman said that IAF aircraft hit a weapons storage facility in the northern Gaza Strip. The strike came in response to earlier rocket barrages fired from Gaza. According to the statement, the target was hit directly.
"Hamas, which uses the other groups to carry out acts of terror against the State of Israel, will be held responsible for any future operation that the IDF choose to launch in order to eliminate the threat of terror and restore relative calm to the region," the IDF statement read.

Around 8:20 pm two rockets were fired toward Ashdod and Ashkelon; both were intercepted by the Iron Dome missile defense system. Shrapnel hit a house in Ashkelon but no injuries were reported.

Earlier on Saturday, IDF officials expressed satisfaction over the outcome of IAF airstrikes in the Gaza Strip, which killed 15Palestinian terrorists, but noted that a terror alert was still in effect, following intelligence suggesting that terrorists from Gaza were planning to cross into the Sinai Peninsula and infiltrate Israel in order to carry out an attack.

IDF Spokesman Brigadier General Yoav Mordechai said that the military decided to target the terror cell because they were planning an attack similar to that carried out in August near the southern city of Eilat.

Mordechai noted that despite the successful operation, "Some of the cell members are still alive and can carry out the attack."

The IDF spokesman said that a total of 100 rockets were launched from the Gaza Strip towards Israel since Friday, out of which about 30 were intercepted by the Iron Dome missile defense system.

"Rockets with a range of 40km or more were fired from the Strip by the Islamic Jihad, while the shorter range rockets were launched by PRC terrorists," he said. The spokesman added that the rockets fired towards Ashdod and Ashkelon originated from the northern Gaza Strip, while rockets directed at Ofakim and Beersheba came from the central part, and rockets hitting Gaza vicinity communities were fired from the southern part of the Strip.

All of the rockets that were not intercepted exploded in open areas. Four foreign workers from Thailand were injured in Eshkol Regional Council while working in an open field. One suffered serious injuries while the others were lightly wounded.

Earlier Saturday, Prime Minister Benjamin Netanyahu spoke with the heads of the southern regional councils and expressed his support.

Internal Security Minister Yitzhak Aharonovitch visited in the south and told residents: "We will continue to act against those who try to harm the State of Israel. Israel will continue to protect its citizens at all times, in all places. Israel is not interested in escalation, but will continue to thwart terrorist activity in the Gaza Strip."