Source: DTN News - - This article compiled by Roger Smith from reliable sources  Prague Daily Monitor(NSI News Source Info) TORONTO, Canada - March 8, 2012: Iraq military continues to be interested in the purchase of Czech-made L-159 subsonic fighter planes, Czech Prime Minister Petr Necas said after a cabinet meeting today.Necas said aircraft makers from other countries are of course competing for the contract on the delivery of fighter planes for Iraq, too. 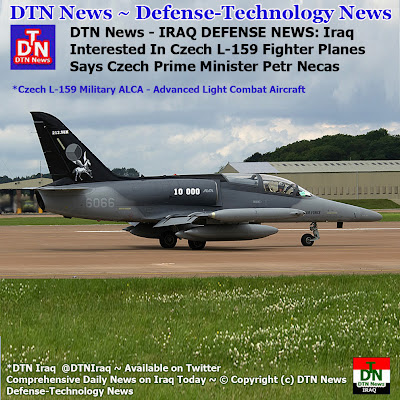 Czech Aero Vodochody company has been negotiating about the deal in Iraq for some time. The L-159's rivals are British Hawk and a supersonic plane offered by Korea in cooperation with the U.S. producer Lockheed Martin.
Czech Defence Minister Alexandr Vondra reported on the latest development of the negotiations with Iraq representatives at the cabinet meeting today.
The next negotiating round is to take place in Bagdad within two weeks, Vondra said.Iraqi Defence Minister Saadoun Dulaimi assured Vondra during his visit to Prague in January that Iraq keeps being interested in the L-159s.According to available information, Iraq is first of all interested in new planes made by Aero Vodochody. The Czech Republic would like to sell also the already produced but mothballed planes, however.Czech representatives point out that these planes may be available practically immediately, unlike new aircraft whose production may take a few years.
The sale of new Czech aircraft to Iraq might be the beginning of long-term cooperation in military aviation between the two countries.Iraq allegedly plans to buy up to 24 new aircraft.Czech military pilots currently use 24 L-159s, while 36 of these planes are mothballed. The maintenance of the redundant planes costs about 30 million crowns a year.Five of the redundant planes were swapped for one CASA C-295 transport aircraft and several of them were used for spare parts or turned into two-seat aircraft. The military is considering further remaking of the unused one-seat L-159s into two-seat test aircraft, media wrote.