Source: DTN News - - This article compiled by Roger Smith from reliable sources Richard Norton-Taylor ~ guardian.co.uk(NSI News Source Info) TORONTO, Canada - March 8, 2012: Military spending by Asian countries, led by China, is rising fast and for the first time is likely this year to outstrip Europe, where governments are cutting their defence budgets, according to a leading London-based thinktank. 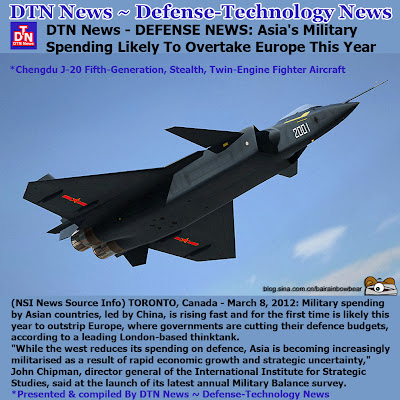 "While the west reduces its spending on defence, Asia is becoming increasingly militarised as a result of rapid economic growth and strategic uncertainty," John Chipman, director general of the International Institute for Strategic Studies, said at the launch of its latest annual Military Balance survey.
Asian countries increased their defence budget by more than 3% in real terms last year, the IISS said. China increased its share of total military expenditure on weapons in the region to more than 30%. Official Chinese military spending totalled nearly $90bn last year, more than two-and-a-half times the 2001 level.
Western analysts point to China's plans for naval "force projection" to defend its growing economic interests in Africa and elsewhere, and secure maritime lanes of communication.
Most attention has focused on China's first aircraft carrier, the former Soviet ship the Varyag, and its new J-20 combat aircraft. "But China's technological advances are more modest than some alarmist hypotheses of its military development have suggested", Chipman said. "They represent nascent rather than actual capability. China, for example, does not yet have the capability to operate fixed-wing aircraft from a carrier."
More immediately significant is China's development of anti-satellite capacities, anti-ship ballistic missiles, cruise missiles, and cyber-warfare capabilities. "Managing tensions in the South China Sea will be an increasing challenge," said the IISS report.
Defence analysts also pointed to potential tensions between the US and China being aggravated by Beijing refusing to agree to confidence-building measures along the lines of those between the US and the Soviet Union during the cold war. "China does not want to give a seatbelt to the US," one defence analyst said.
Australia, Indonesia, Malaysia, Singapore, Thailand and Vietnam are all investing in improving air and naval capacities, as are India, Japan and South Korea. India, for instance, plans to boost maritime capacities with submarines and aircraft carriers, said the IISS.
In Europe, defence budgets remain under pressure and cuts to equipment programmes continue. Between 2008 and 2010 there were reductions in defence spending in at least 16 European Nato member states. In a significant proportion of these, cuts in real terms exceeded 10%.
*Link for This article compiled by Roger Smith from reliable sources Richard Norton-Taylor ~ guardian.co.uk*Speaking Image - Creation of DTN News ~ Defense Technology News *This article is being posted from Toronto, Canada By DTN News ~ Defense-Technology News Contact:dtnnews@ymail.com ©COPYRIGHT (C) DTN NEWS DEFENSE-TECHNOLOGY NEWS
Posted by DEFENSE NEWS at 2:19:00 AM