The Chinese state news agency has posted photographs of an aircraft carrier under reconstruction that appears to show the warship near completion. Captions with the photos said that construction would end soon, and that the carrier is expected to sail later this year. 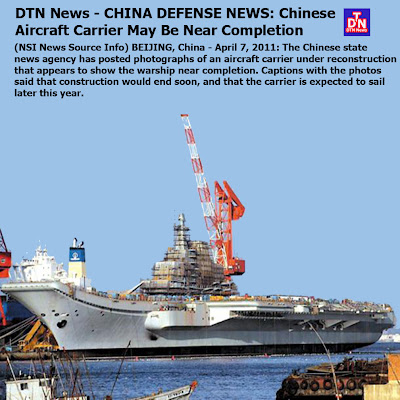 The photos of the carrier, the Varyag, which China bought from the Ukraine in 1998, appeared Wednesday on the Web site of Xinhua, the state news agency. It was the first time that Xinhua had given visual evidence of the carrier project, which is widely seen as a linchpin of China’s military modernization and naval ambitions. The carrier is being rebuilt in the waters of Dalian, a coastal city in eastern China.

Xinhua cited a military analysis magazine based in Canada, Kanwa Asian Defense Review, as saying that the ship will be ready to sail this year. The fact that Xinhua used that information in a photo caption appeared to be an official endorsement of that view.

Xinhua’s headline with the photos said: “Huge warship on the verge of setting out, fulfilling China’s 70-year aircraft carrier dreams.” One caption said: “A few days ago, domestic online military forums consecutively published photographs of the Varyag aircraft carrier being reconstructed at China’s Dalian shipyard. From the pictures, we can see that this project is entering its final stage.” The caption noted that construction on the bridge was almost done, with the exception of a radar system.

The online sites it referred to are discussion forums used by Chinese military enthusiasts.

Andrei Cheng, the founder of the magazine in Canada said in a telephone interview on Thursday that the photographs published by Xinhua showed the carrier at a much more advanced stage of construction than he had expected. He said his magazine had gotten photos of the carrier taken in February, but that those photos did not show any paint on the ship’s upper structure, while the ones published by Xinhua did.

“The speed is very, very amazing, he said. “It’s surprised me.”

At a news conference last week, a spokesman for the People’s Liberation Army declined to answer a question from a foreign journalist about the carrier project. A broad-ranging national defense white paper released by the military that day had no details on the carrier.

On Thursday, a Foreign Ministry spokesman was asked about the carrier photos at a regularly scheduled news conference in Beijing.

“Please refer to the relevant authorities for details,” said the spokesman, Hong Lei. “I would like to emphasize that China follows a peaceful path of development.”

In January, photographs emerged on Chinese military forums of the J-20 stealth fighter, which has been under construction in Sichuan Province. The appearance of the photos came just days before Robert M. Gates, the United States Defense Secretary, visited China. Military officials tested the fighter while Mr. Gates was in Beijing, which led to a puzzling and awkward diplomatic moment between Mr. Gates and President Hu Jintao.