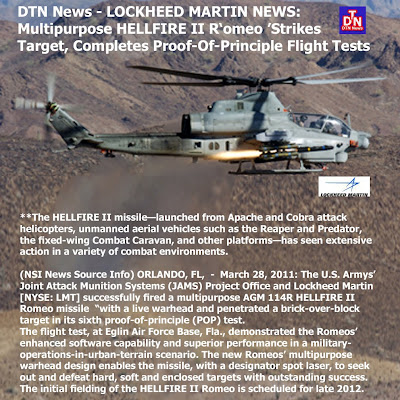 The flight test, at Eglin Air Force Base, Fla., demonstrated the Romeo’s enhanced software capability and superior performance in a military-operations-in-urban-terrain scenario. The new Romeo’s multipurpose warhead design enables the missile, with a designator spot laser, to seek out and defeat hard, soft and enclosed targets with outstanding success. The initial fielding of the HELLFIRE II Romeo is scheduled for late 2012.

“The AGM-114R baseline design is now defined and allows us to go into system qualification,” said U.S. Army Lt. Col. Mike Brown, HELLFIRE Systems product manager at JAMS. “The R model remains on cost and on schedule, and meets all performance objectives.”

Engineers ground-launched the single HELLFIRE II Romeo missile in a lock-on-after-launch mode, simulating the missile being fired from a rotary-wing platform. The short-range (2.5 kilometer) high-speed impact shot penetrated the brick-over-block target and successfully detonated with the specified fuze delay.

“We redesigned the warhead to combine the capabilities of our four previous HELLFIRE II variants into one single multipurpose missile,” said Ken Musculus, director of Air-to-Ground Missile Systems at Lockheed Martin Missiles and Fire Control. “Our POP tests conclusively proved that the HELLFIRE II Romeo meets all of its requirements, and will provide a valuable capability to the warfighter.”

New design features on the HELLFIRE II Romeo include a three-axis inertial measurement unit, which enables properly equipped launch platforms to engage targets to the side and behind them without having to maneuver the aircraft into position. The missile can be launched from high or low altitudes due to its enhanced guidance system and improved navigation capabilities, optimizing the missile’s impact angle for enhanced lethality.

The HELLFIRE II Romeo integrates with all HELLFIRE II-compatible platforms, and can be launched autonomously or with remote designation. Rotary-wing platforms include the Apache, Kiowa Warrior, Cobra and Seahawk, as well as the Tiger Armed Reconnaissance Helicopter for Australia and the Tiger Hélicoptère d’Appui Destruction for France. The HELLFIRE has also been demonstrated on ground-based tripods, ground vehicles and boats.

With multi-mission and multi-target capability, HELLFIRE is the primary air-to-ground missile system for the U.S. Armed Forces and many allied nations. Lockheed Martin performs all work on behalf of the HELLFIRE Systems Limited Liability Company at its manufacturing facilities in Troy, Ala., and Ocala, Fla.