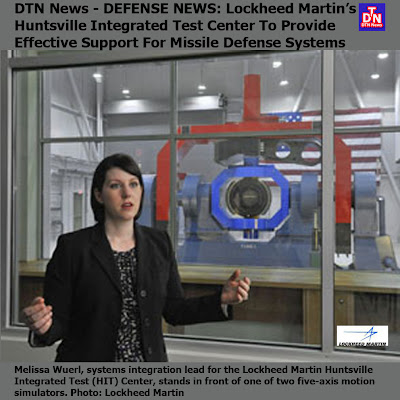 Government and community officials participating in the ceremony included U.S. Rep. Mo Brooks, Huntsville Mayor Tommy Battle and Charlie Kettle, chairman of the board for the Huntsville/Madison County Chamber of Commerce. More than 100 people attended the ceremony, including Lockheed Martin employees, government and military personnel, industry partners and community members.

The HIT Center will provide high fidelity, end-to-end testing of missile defense systems with full hardware and digital functionality, applying the “test-like-you-fly” philosophy. The center will support full-scale hardware-in-the-loop testing of missile defense interceptor and ground systems in a reconfigurable environment. Featuring two five-axis motion simulators with infrared scene generators, the center will support salvo and multi-tiered intercept scenarios, hardware and software validation, risk reduction and rapid evaluation of evolving threats. In this controlled laboratory environment, anomalies can be analyzed and pinpointed prior to further testing at government test ranges.

A variety of missile defense systems can be tested in the facility. This includes systems for the Ground-based Midcourse Defense (GMD) Development and Sustainment Contract, for which the Lockheed Martin- Raytheon team submitted its proposal Jan. 27, and other weapon system elements.

The center is equipped with high-speed fiber optic connectivity throughout the building. This allows the center to connect to government laboratories and major first- and second-tier missile defense suppliers, in the future.

Joe Still Construction, the general contractor, broke ground on the 21,000-square-foot building June 15, 2010. The building will be ready for initial occupancy in May. An additional phase, which is planned for completion by the end of the year, will include a system integration laboratory and a missile integration laboratory.

The new facility is the ninth building in the Lockheed Martin 80-acre campus on Bradford Drive in Research Park, which the company has occupied since 1963.