US, European and Arab leaders began the largest international military intervention in the Arab world since the invasion of Iraq today in an effort to stop Colonel Muammar Gaddafi’s war on the Libyan opposition. 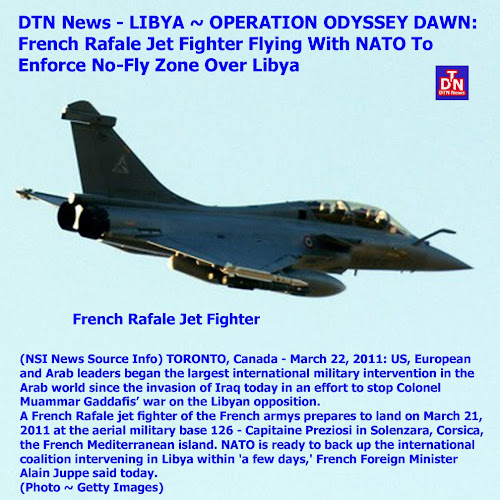 A French Rafale jet fighter of the French armys prepares to land on March 21, 2011 at the aerial military base 126 - Capitaine Preziosi in Solenzara, Corsica, the French Mediterranean island. NATO is ready to back up the international coalition intervening in Libya within 'a few days,' French Foreign Minister Alain Juppe said today.

Leaders meeting in Paris this afternoon said direct strikes against Libyan government forces, as approved by the United Nations Security Council yesterday, would begin within hours. And President Nicolas Sarkozy said French warplanes had already begun enforcing a no-fly zone in Libya, conducting reconnaissance missions and preparing to intercept any Libyan military aircraft. And the French military announced that a Rafale jet fighter had destroyed a government tank near the de facto rebel capital, Benghazi, in eastern Libya.

Despite an ultimatum from Western powers demanding that Gaddafi keep a cease-fire, reports of bombardment and fighting came from the main rebel-held city in eastern Libya, Benghazi. Witnesses there reported heavy artillery strikes and that government tanks and ground troops were moving throughout the city. A steady stream of vehicles, some bearing rebel flags, was seen pouring out to the east.