Qatar fighter pilot, in a strong and symbolic show of military support, became the first from any Arab nation to fly a combat mission over Libya Friday. 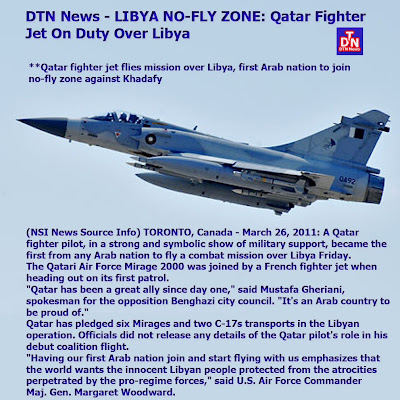 The Qatari Air Force Mirage 2000 was joined by a French fighter jet when heading out on its first patrol.

"Qatar has been a great ally since day one," said Mustafa Gheriani, spokesman for the opposition Benghazi city council. "It's an Arab country to be proud of."

Qatar has pledged six Mirages and two C-17s transports in the Libyan operation. Officials did not release any details of the Qatar pilot's role in his debut coalition flight.

"Having our first Arab nation join and start flying with us emphasizes that the world wants the innocent Libyan people protected from the atrocities perpetrated by the pro-regime forces," said U.S. Air Force Commander Maj. Gen. Margaret Woodward.

As the U.S. was poised to take a reduced role in the coalition's air operation, Pentagon officials indicated they could deploy Air Force gunships and attack aircraft more useful in urban fighting.

Yet for a second straight day, no American planes were used in air strikes against Col. Moammar Khadafy's forces.

President Obama, after meeting with congressional leaders yesterday about Libya, plans to address the country Monday about the situation.

Coalition forces unleashed a seventh straight day of fighter jet and missile strikes on the Khadafy military sites and operations. At least three explosions rocked the capital of Tripoli and an eastern suburb.

"We assess that our strikes on regime forces around the city have had an effect," he said. "But the regime is still able and still determined to reinforce their positions there."

The coalition's focus on military targets has disrupted the communications system for the Libyan forces, Gortney said.