Forces loyal to Libyan leader Moamer Kadhafi were retreating Saturday after rebels recaptured the key eastern towns of Ajdabiya and Brega in their first significant victory since Western-led air strikes began a week ago. 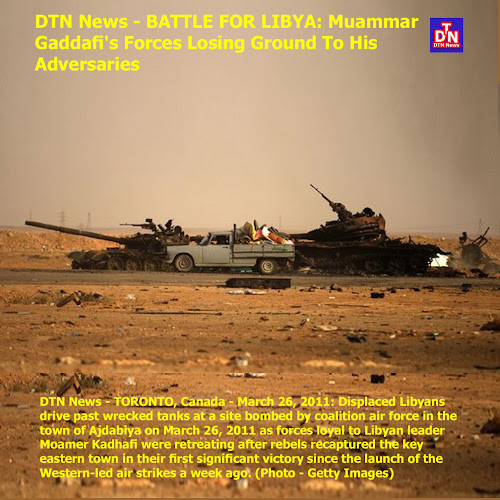 US President Barack Obama said the international mission had saved countless innocents from a "bloodbath" threatened by Kadhafi, and the rebels thanked France for its role in the military blitz but said "outside forces" could now leave the country.

Ajdabiya was "100 percent in the hands of our forces," a rebel spokesman, Shamsiddin Abdulmollah, told reporters in the stronghold of Benghazi.

"Who is on the back foot are Kadhafi's forces because they no longer have air power and heavy weaponry available" after a week of bombing by coalition warplanes, he said.

Another spokesman, Ahmed Khalifa, said the rebels had captured at least 13 Kadhafi fighters who were being treated as prisoners of war.

A rebel fighter told AFP insurgents had retaken Brega also, and a journalist travelling with them confirmed seeing rebels in control of the centre of the oil town, and said government forces had completely withdrawn.

"We are in the centre of Brega," 80 kilometres (50 miles) west of Ajdabiya, Abdelsalam al-Maadani told AFP by telephone. "Kadhafi's forces are on the retreat."

The rebels, backed by the Western barrage, earlier poured into Ajdabiya, where destroyed tanks and military vehicles littered the road, AFP correspondents reported.

The bodies of at least two pro-Kadhafi fighters were surrounded by onlookers taking photos, while a mosque and many houses bore the scars of heavy shelling as the rebels celebrated, firing into the air and shouting "God is greater."

Scene: At site of Kadhafi's defeat, carnage and craters

Outside Ajdabiya, the bodies of 21 loyalist soldiers had been collected, a medic told AFP.

Regime loyalists had dug in at Ajdabiya after being forced back from the road to Benghazi by the first coalition air strikes. Residents accused them of brutalising the population.

Ibrahim Saleh, 34, told AFP: "The tanks were firing on the houses non-stop. I couldn't move from my house for days. There was no water or fuel or communications, and when people went out even to get fuel they were fired on.

"The coalition air strikes were yesterday and the day before. They attacked from the skies and the revolutionaries came in afterwards and freed the city."

Rebel spokesman Colonel Ahmed Omar Bani told a Benghazi news conference that Kadhafi's forces at Ajdabiya were asked several times to surrender, and were attacked when they refused to do so.

Ajdabiya, straddling the key road to Benghazi, is the first town to fall back into rebel hands since a coalition of Western forces launched UN-backed air strikes on March 19 to stop Kadhafi's forces attacking civilians.

But in Libya's west, where the capital Tripoli and most of Kadhafi's support is located, the port city of Misrata was in dire need of help from coalition jets and humanitarian groups because of attacks by Kadhafi forces, the rebels said.

"Please, do something about Misrata," one member of the rebellion, Mustafa Gheriani, pleaded.

"People there are willing to take casualties. They need intervention," he said. "Please, they need a floating hospital."

Abdulmollah said he believed a hospital ship organised by non-governmental organisations was en route to Misrata under NATO escort from Malta.

"The international community must urgently intervene to protect the population," pleaded the spokesman who asked that his name be withheld.

"People have been killed and wounded," he said, unable however to give a detailed toll.

On Thursday a city doctor said that at least 109 people have been killed in Misrata, Libya's third city, and more than 1,300 wounded in a week of attacks by Kadhafi forces.

French fighters destroyed at least five warplanes and two helicopters from pro-Kadhafi forces in the Zintan and Misrata regions on Saturday, the military said in a statement on the French armed forces website.

Elsewhere, huge explosions shook a military site in an eastern suburb of Tripoli early Saturday as Western forces piled pressure on the regime.

The blasts left a radar facility in flames in Tajura, home to several military bases, a witness told AFP.

"The district was shaken by three explosions in succession," the resident said, adding that the explosions had shattered windows.

"The raid targeted a military radar site which is still on fire," added the resident, who lives nearby.

Under pressure to explain his strategy to Americans, Obama gave his most detailed review of the conflict so far, and insisted national interests were behind his decision to order US forces into UN-mandated combat.

"Make no mistake, because we acted quickly, a humanitarian catastrophe has been avoided and the lives of countless civilians -- innocent men, women and children -- have been saved," he said in his weekly radio and online address.

Obama said a week into the operation that when innocent people were brutalised by a leader like Kadhafi threatening a "bloodbath," and when nations were prepared to respond together, "it's in our national interest to act."

"And it's our responsibility. This is one of those times," he said.

"Our military mission in Libya is clear and focused," he added, noting the no-fly zone was mandated by the UN Security Council and that an international coalition was protecting Libyans to prevent "further atrocities."

"We're succeeding in our mission. We've taken out Libya's air defences. Kadhafi's forces are no longer advancing across Libya."

Obama repeated his warnings that Kadhafi should go.

"Moamer Kadhafi has lost the confidence of his people and the legitimacy to rule, and the aspirations of the Libyan people must be realised," he said.

The Libyan opposition's interim national council leader Mahmoud Jibril said his people no longer needed outside help, in a letter to French President Nicolas Sarkozy and published by the daily Le Figaro.

"In the middle of the night, your planes destroyed tanks that were set to crush Benghazi. ... The Libyan people see you as liberators. Its recognition will be eternal," he wrote.

Russia's chief of staff, General Nikolai Makarov, told the Interfax news agency in Moscow: "Air (strikes) as I see it have not given them results.

"If their aim was to topple the regime of Kadhafi, then probably they will not manage without a ground phase," he was quoted as saying. "I would not rule it out."