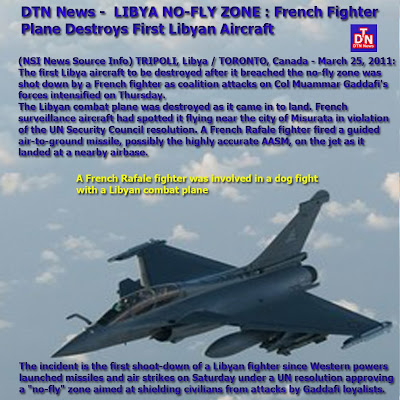 The Libyan combat plane was destroyed as it came in to land. French surveillance aircraft had spotted it flying near the city of Misurata in violation of the UN Security Council resolution. A French Rafale fighter fired a guided air-to-ground missile, possibly the highly accurate AASM, on the jet as it landed at a nearby airbase.

The incident is the first shoot-down of a Libyan fighter since Western powers launched missiles and air strikes on Saturday under a UN resolution approving a "no-fly" zone aimed at shielding civilians from attacks by Gaddafi loyalists.

The Libyan government appealed to the United Nations to stop allied forces bombing civilian broadcasting and telecommunications facilities in the country. Dr Mussa Ibrahim, the official government spokesman, said the authorities had received intelligence that such attacks would take place imminently, as early as Thursday night.

"We have of course our Plan B to continue broadcasting," he said. "But we would like to say this would be very immoral and illegal. These are civilian targets." He said as well as the loss of civilian life, such attacks would cause harm to civilians trying to go about their normal lives across Libya. The allies have not made clear how far they intend their bombing campaign to go in undermining everyday life in Libya.

The loss of oil production, sanctions such as the freezing of assets, and the chaos caused by the departure of hundreds of thousands of foreign workers have already hit towns across the country hard. Long queues of hundreds of cars have been lined up outside petrol stations in the capital Tripoli, while there have also been queues for bread though in general food supplies are holding up. Since the bombing started, shops, which had tentatively started to reopen again after weeks of protests, have largely closed again.

Allied forces also attacked communications and broadcast facilities as well as other civilian state infrastructure during the bombing of Belgrade in 1999 and Baghdad in 2003.

On the sixth day of the campaign coalition aircraft and warships stepped up strikes against Col Gaddafi's forces including artillery, tanks, an ammunition bunker and a small number of helicopters parked on an airfield along the coast.

The French are seeing the majority of the action because their operational area – referred to as "ops-box" – covers the key strategic town of Misurata. The RAF are understood to be patrolling the skies in the east of the country around Benghazi which has not been the focus of attacks on Gaddafi forces.

French jets, including Rafales and Mirage 2000s, also made a raid deep inland attacking an airbase 150 miles from the Libyan coast.

An intense air raid was also made on Col Gaddafi's southern stronghold of Sebha, a local resident reported.

Dr Ibrahim denied claims by western powers, repeated by William Hague, the foreign secretary, in the House of Commons on Thursday, that the Libyan government's claim to have implemented a ceasefire was a "sham". He said Libyan forces were only engaged in self-defence, and said snipers reported to be operating on rooftops in the besieged city of Misurata were rebels, not government forces. He called on the rebels and the allies also to announce ceasefires, and to send a fact-finding mission to discover the "truth on the ground".

More than 175 £800,000 Tomahawk missiles have now been fired to suppress Col Gaddafi's air defences and limit his ability to respond to jets patrolling the skies.

A fleet of coalition warships was also stepping up efforts to prevent arms smuggling. Vice Admiral Rinald Veri, said he expected to have enough vessels in place in a few days for an effective maritime blockade, "closing the main front door".

The fleet includes the Royal Navy frigates Westminster and Cumberland, which it was announced yesterday would have a stay of execution from being scrapped on April 1 and continue in service at least for another fortnight.

For the first time Norway took part in operations sending two F-16 fighters over Libya, as part of a six plane squadron.