The following is a summary of analysts' assessments of the likely economic impact of the devastating earthquake and tsunami that struck the northeast coast of Japan. Most assessments were published before workers were ordered to withdraw briefly from a quake-hit nuclear plant amid fears that the crisis was spiraling out of control. 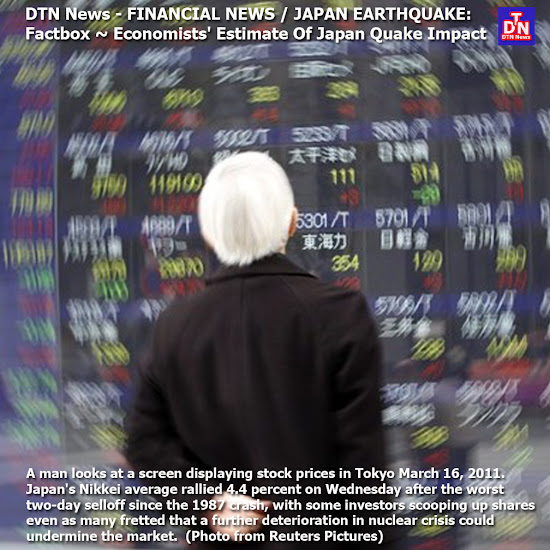 "In our base scenario (a), we estimate that real GDP will contract in the second-quarter, but return to 2 percent growth in the third quarter, once the impact of power outages disappears. Real GDP is pushed down around 0.5 percent in this case.

"In the event power outages are prolonged however, such as cases (b) and (c), we estimate a 2 percent contraction in real GDP in 2Q; and if they were to last until end-December (case c), we estimate GDP would continue declining until the year-end."

"Any disaster will diminish the value of assets and is never positive for the economy. The disruption caused by a disaster usually results in lower economic output in that particular month or quarter. However, in the longer term, disasters actually tend to bring a larger growth, rather than a smaller growth, because of the reconstruction demand for infrastructure and replacement demand for consumer durables.

"Consequently, we expect a severe decline in economic output for a month or two, followed by a sharp rebound in the following months. The main risk to 'a trough and a spike' scenario is a significant and prolonged shortage of power, as described earlier."

"We would expect a good deal of production shifting: for example, prior to the disaster, the auto sector was running about 20 percent below its peak in 2007.

"As a rough estimate, looking back at past disasters, our team in Tokyo expects GDP to drop roughly 0.5 percentage points over the full year relative to their baseline of 1.5 percent. However, the drop is short-lived: they expect a surge in reconstruction to add to growth in the second half and in 2012."

"The economic cost of the disaster will be large. There has been substantial loss to economic resources, and economic activity will be impeded by infrastructure damages (like power outages) in the weeks or months ahead. However, the rebuilding effort will be a significant boost particularly in H2."

* Rough estimates suggest that the negative impact on global growth this year will be negligible -- at most in the 0.1 percent to 0.2 percent range, with a correspondingly small boost to growth next year

On the GDP outlook: "If the nuclear crisis turns into a full-blown catastrophe, then the negative effect on growth this year will be much larger.

"The big uncertainty about this disaster (and what sets it apart from other such disasters) is that roughly 10 percent of electricity generation capacity (both nuclear and coal) may be off line for a few months, until oil- and gas-fired plants can ramp up. In the near-term, this could have major negative ramifications for the Japanese industrial sectors; some steel and automotive factories have already been closed."

* Total economic losses could be 14-15 trillion yen, less than half that of the 1995 Kobe earthquake; recovery could cost 4-5 trillion over next three years

* Growth to be slower than previously forecast in H1, but faster in H2 because of reconstruction

"It may be too early to discuss how much damage was done to housing and infrastructure, but we suspect it could match that of the Great Hanshin Earthquake in 1995.

"Some of the damage will likely generate reconstruction demand and bolster activity in the coming months as actual restoration begins."

"It remains to be seen, but I would think the impact most likely would be temporary. So you will have a drop in economic growth, but after that, of course, a recovery process.

"Because of disruptions to power supplies and transport, you to tend to find drops in (economic growth). But as that infrastructure is repaired in the months ahead, you get a re-acceleration in economic growth. This is by far the most likely outcome."

"The final damages are expected to exceed those from the Kobe earthquake. As noted above, there is also a need to consider the potentially negative impact on other regions due to the Tohoku region's "trade economy" character.

"Earthquakes not only curb effective demand (eg. consumption, capex) but also lower potential growth through damage to tangible fixed assets and human capital. In terms of the CPI, we believe the impact will be neutral."

"Based on what occurred after the Kobe earthquake, we think an all-out slump in the Japanese economy caused by the Sendai earthquake is overly pessimistic. However, a V-shaped recovery supported by a rapid upturn in demand driven by rebuilding work in the affected areas is also unlikely.

"We now expect the Japanese economy to take longer than we expected to exit its current soft patch owing to the earthquake and tsunami.

"The consensus forecast on the timing for this exit was Jan-March 2011, while we had projected April-June. However, we now think July-September or possibly October-December is more likely. We expect solid economic recovery to be confirmed in October-December."

* Rebuilding costs to be at least 1 percent of GDP

* Likely to see negative GDP growth in the first quarter

"Provided that the authorities can successfully contain a nuclear-plant crisis, we now expect most economic activity to take a substantial hit in March/April but to rebound in the following months.

"In terms of assessing the damage, this is still a developing situation. It is now feared that energy rationing could continue until the end of April. This, plus damage to supply chains, could hit production even for companies far removed from the scene of the disaster.

"Also, confidence is fragile, and there are fears that the situation at the nuclear plants may deteriorate. If so, this could hit confidence further."

"The Bank of Japan announced to double its asset purchase program on Monday. Meanwhile, it injected a record 15 trillion yen into the banking system to ease liquidity concerns. The additional easing action taken by the BOJ is likely to turn Japan's inflation slightly positive in the near future."