Following are responses from airlines from several countries followingJapan's earthquake and tsunami and subsequent crisis at a nuclear power complex. 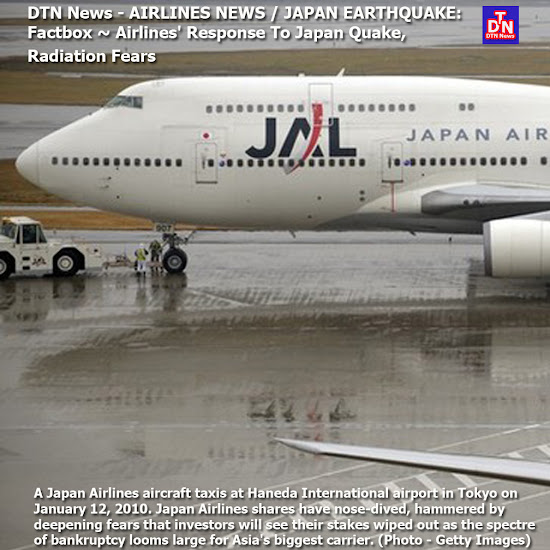 Workers were briefly ordered to withdraw from a stricken nuclear power plant on Wednesday after radiation levels surged.

-- Qantas said it was flying to Japan as normal.

-- Air China said it had canceled some flights to Tokyo from Beijing and Shanghai, mainly due to lack of operational capacity at some airports(www.airchina.com.cn).

-- China Eastern Airlines suspended flights from Shanghai to Fukushima, but other flights between China and Japan were still operating and it was adding an extra flight to Tokyo on Thursday to help Chinese citizens get home.

-- China South Airlines said it had canceled one flight from Changchun to Sendai, which was badly hit by the tsunami, between March 14 and March 26. It added one more flight to Tokyo on Wednesday to get Chinese citizens back.

-- Deutsche Lufthansa said it was continuing to fly to Japan but was diverting flights away from Tokyo to Osaka and Nagoya via Seoul until at least the weekend.

-- Air France-KLM moved all its crew out of Tokyo to Osaka on Monday but a statement on its website on Wednesday said flights were continuing as normal.

-- A Cathay Pacific spokesperson said in a statement: "We are monitoring the situation very carefully and so far there has been no authoritative suggestion that flight operations to Japan are likely to be affected."

-- Malaysia's AirAsia, Asia's largest budget carrier by fleet size, and Malaysian Airline System, the country's national carrier, said they were flying to Tokyo without any disruptions to schedule yet. But they say they were monitoring the situation.

-- Air New Zealand flights to Tokyo were continuing as per schedule for the time being but were being reviewed in the light of new information.

-- Cebu Air, operator of budget carrier Cebu Pacific, said it had no plans for now to cancel its three times weekly flights to Osaka.

-- Philippine Airlines said it was closely monitoring the situation in Japan, but at the moment its operations center had determined no threat to its operations. The airline flies to Narita, Kansai, Nagoya and Fukuoka 32 times weekly.

-- Singapore Airlines said on its website that it was closely monitoring developments in Japan but that at this point, all its flights to and from Japan are operating as scheduled.

-- EVA Airways said it would cancel flights to Tokyo and Sapporo until the end of March.

-- Thai Airways International was still flying to Japan as normal.

Turkish airlines said on its website it was flying as normal to Japan.

- Emirates said on its website it was flying as normal to Japan.