Source: DTN News - - This article compiled by Roger Smith from reliable sources AFP
(NSI News Source Info)
MOSCOW, Russia
- March 7, 2011:
Russia is to lose $4 billion in arms exports to Libya due to the imposition of UN sanctions against Muammar Gaddafi’s regime, one of its chief weapons clients in the Middle East, an official said Thursday. 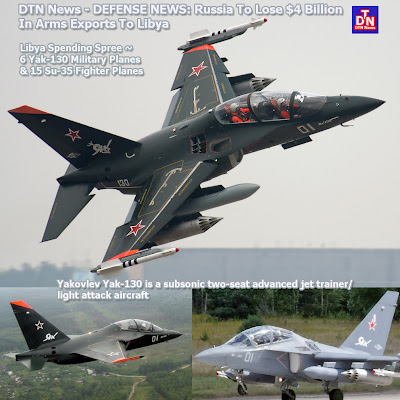 State arms exporter “Rosoboronexport’s lost income from the situation in Libya amounted to $4 billion,” the head of state industrial holding Russian Technologies Sergei Chemezov was quoted as saying by the Interfax and RIA Novosti news agencies.

Russia was initially slow to echo Western condemnation of Gaddafi amid his bloody crackdown on an uprising but on Saturday it joined other UN Security Council members in ordering an arms embargo against Libya and other sanctions.

The Arab world is the main export market for Russian arms after traditional partners China and India.

Libyan Defence Minister Yunis Jaber had gone on a major spending spree during a January 2010 visit to Moscow, signing 1.3 billion euros ($1.8 billion) worth of deals including for six Yak-130 military planes.

Meanwhile, Libya had also been expected to become the first foreign buyer of Russia’s new Su-35 fighter and a contract worth $800 million for 12-15 planes had been ready for signing, reports have said.

A range of other contracts for helicopters and missile systems were also being discussed.

Defence Minister Anatoly Serdyukov said Moscow was “really alarmed” by the effect the revolts sweeping the Arab world could have on its weapons exports.

Asked whether Russia would now be able to record $10 billion of arms exports this year, Chemezov replied: “We will try.” He gave no further details or comments.

Despite its concern over arms exports, Moscow has slowly started to show a tougher political line towards Gaddafi’s regime as it battles to stay in power.

A Kremlin source said this week that Gaddafi is a “living political corpse” who has no place in the civilised world, in Russia’s first clear call for the Libyan leader to quit.

Medvedev has yet to echo such graphic rhetoric himself but on Thursday he issued one of bluntest warnings yet over the situation by any world leader, saying Libya is on the verge of civil war.

“This is an extreme situation,” he told Russia’s Emergencies Minister Sergei Shoigu, according to state news agency ITAR-TASS.

“Libya was and is on the verge of civil war and our main task was to save our people there (Russian citizens),” he said, praising the operation to evacuate Russians from Libya.

“During such events (such as in Libya) there is usually a complete disorganisation in the management of the state. And this is what we are seeing,” he added.