Australia will buy a large amphibious warship from Britain and a C-17 wide-body military transport plane from Boeing to expand its fleet, which is currently on earthquake relief operations in Japan, the defence minister said on Thursday. 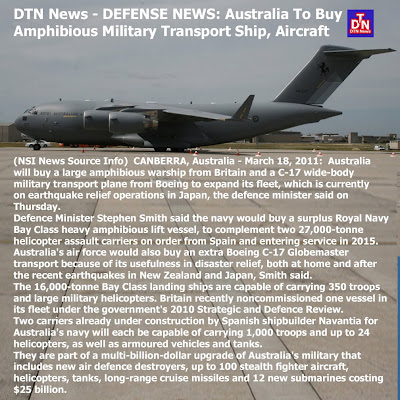 Australia's air force would also buy an extra Boeing C-17 Globemaster transport because of its usefulness in disaster relief, both at home and after the recent earthquakes in New Zealand and Japan, Smith said.

The 16,000-tonne Bay Class landing ships are capable of carrying 350 troops and large military helicopters. Britain recently noncommissioned one vessel in its fleet under the government's 2010 Strategic and Defence Review.

Two carriers already under construction by Spanish shipbuilder Navantia for Australia's navy will each be capable of carrying 1,000 troops and up to 24 helicopters, as well as armoured vehicles and tanks.