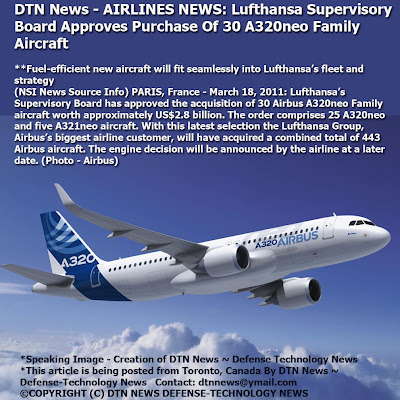 Lufthansa’s Supervisory Board has approved the acquisition of 30 Airbus A320neo Family aircraft worth approximately US$2.8 billion. The order comprises 25 A320neo and five A321neo aircraft. With this latest selection the Lufthansa Group, Airbus’s biggest airline customer, will have acquired a combined total of 443 Airbus aircraft. The engine decision will be announced by the airline at a later date.

The A320neo incorporates new more efficient engines and large "Sharklet" wing tip devices, which together will deliver up to 15 percent in fuel savings. This will represent some 3,600 tonnes less CO2 per aircraft, per year. In addition, the A320neo will provide a double-digit reduction in NOx emissions and reduced engine noise, thus being a good neighbour at any airport where Lufthansa is operating the aircraft.

“We salute Lufthansa’s decision for sustainable growth with our eco-efficient A320neo aircraft, which will fit seamlessly into its Airbus A320 fleet,” said John Leahy, Airbus Chief Operating Officer, Customers. “Since its launch in December last year, the ‘neo’ has taken the market by storm and has already attracted more than 330 commitments – with more to come. This represents the fastest rate of sales for any commercial aircraft ever.”

Today the Lufthansa Group is Airbus’ biggest operator worldwide with around 339 Airbus aircraft currently in service. These include: 236 A320 Family; 33 A330s; 65 A340s; and five A380s delivered. In addition to this latest decision for 30 aircraft, the Lufthansa Group has an order backlog which includes 60 A320 Family aircraft, eight A330s, and 10 A380s.

The A320 Family (A318, A319, A320 and A321) is recognised as the benchmark single-aisle aircraft family. Almost 7,000 Airbus A320 Family aircraft have been ordered and over 4,500 delivered to more than 320 customers and operators worldwide. The A320neo will have over 95 percent airframe commonality with the existing models making it an easy fit into existing fleets while offering up to 500 nautical miles (950 kilometres) more range or two tonnes more payload. Engines offered on the A320neo are CFM International’s LEAP-X and Pratt & Whitney’s PurePower PW1100G.