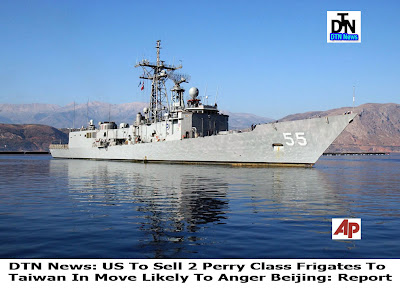 two warships, a move that would almost certainly anger China and further undermine Beijing's already tense relations with Washington.
The report, in the mass circulation Apple Daily, quotes an unnamed Taiwanese senior officer as saying that the U.S. Navy will sell Taiwan two Perry class frigates, about to be decommissioned, for $20 million each. The ships' sale will be formally approved by the State Department in late 2010 or early 2011, the paper quoted the officer as saying.
Taiwan's defense ministry and the de facto U.S. Embassy in Taipei declined to comment on the report.
Any new sale of U.S. military hardware to Taiwan could be expected to incense China. The mainland and the island split amid civil war in 1949, and Beijing sees third country involvement in the island's defense as interference in its internal affairs.
Long dormant tensions between Washington and Beijing resurfaced last month when U.S. Secretary of State Hillary Clinton told an Asian forum in Hanoi, Vietnam, that the U.S. regarded settlement of a series of territorial disputes between China and several Asian countries in the South China Sea as being in America's national interest.
The Chinese Foreign Ministry described those comments — and Clinton's demand that the disputes be resolved through multilateral negotiations — as "an attack." China prefers to address the disputes bilaterally because it believes that approach works to its advantage.
Washington transferred recognition from Taipei to Beijing in 1979 but is legally committed to helping Taiwan defend itself against possible Chinese attack.
A multibillion dollar sale to the island of American command and control systems and other sophisticated armaments led to a freeze in formal contacts between the Chinese and American militaries when it was announced earlier this year.
Perry class frigates were designed in the U.S. in the 1970s. They can be used to launch submarine-hunting helicopters. China's submarine deployment in the Taiwan Strait — the 100-mile- (160-kilometer-) wide body of water separating the island from the mainland — is a major Taiwanese concern.
Description
Frigates fulfill a Protection of Shipping (POS) mission as Anti-Submarine Warfare (ASW) combatants for amphibious expeditionary forces, underway replenishment groups and merchant convoys.
Background
The guided missile frigates (FFG) bring a short range anti-air warfare (AAW) capability (provided by their Phalanx Close-In Weapon System) to the frigate mission, but they have some limitations. Designed as cost efficient surface combatants, they lack the multi-mission capability necessary for modern surface combatants faced with multiple, high-technology threats. They also offer limited capacity for growth. Despite this, the FFG 7 class is a robust platform, capable of withstanding considerable damage. This "toughness" was aptly demonstrated when USS Samuel B. Roberts struck a mine and USS Stark was hit by two Exocet cruise missiles. In both cases the ships survived, were repaired and returned to the fleet. USS Stark was decommissioned in May 1999.
The Surface Combatant Force Requirement Study does not define any need for a single mission ship such as the frigate and there are no frigates planned in the Navy's five-year shipbuilding plan.
The lead ship of the class, USS OLIVER HAZARD PERRY (FFG 7), and the following ships have been decommissioned: FFG 9-16, 19-27, 30, 31, & 34.
FFG 17, 18, 35, & 44 were built for Australia.
Posted by DEFENSE NEWS at 9:28:00 AM