Source: DTN News / AFP
(NSI News Source Info) LONDON , U.K. - August 6, 2010: The leaders of Britain and Pakistan on Friday smoothed over a row about tackling terrorism in the South Asian republic as they agreed to step up cooperation in fighting extremism.
British Prime Minister David Cameron had suggest 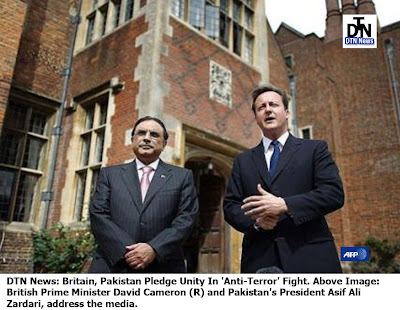 ed last week that elements in Pakistan were backing the "export of terror", triggering a diplomatic spat.
But he and Pakistani President Asif Ali Zardari put on a show of unity after their talks outside London, saying the bond between Pakistan and the former colonial power was unbreakable.
Cameron accepted an invitation to visit Islamabad soon and agreed to a yearly summit to strengthen ties.
"This is a friendship that will never break, no matter what happens," Zardari said outside the prime minister's weekend retreat of Chequers, northwest of London.
"Storms will come and storms will go, and Pakistan and Britain will stand together and face all the difficulties with dignity," he said.
Cameron said he wanted to enhance London's "unbreakable relationship" with Islamabad "in the absolutely vital area of combating terrorism".
"Whether it's keeping troops safe in Afghanistan or to keep people safe on the streets of Britain, that is a real priority for my government," he said.
Cameron's predecessor Gordon Brown said in 2008 that up to three-quarters of the alleged terror plots then under investigation in Britain were linked to Pakistan.
Zardari has insisted Islamabad is committed to fighting militants in the region, including in Afghanistan, where the Taliban have waged a fierce insurgency since the US-led invasion drove them from power in 2001.
Speaking after their meeting, Cameron and Zardari said London and Islamabad would step up their anti-terror co-operation.
"Among the common challenges facing the UK and Pakistan is the fight against terrorism and violent extremism," they said in a joint statement.
"Both leaders appreciated the close co-operation that already exists between respective police forces and other security agencies. The two leaders agreed that such co-operation needs to and will intensify."
Under the new partnership terms, ministers will meet to enhance links within their briefs. The foreign ministers will meet in October, and Britain's interior minister will visit Pakistan within months.
Top civilian and military officials are expected to work closely with their opposite numbers.
Cameron briefed US President Barack Obama after the Zardari talks.
Relations between the two Commonwealth countries soured after Cameron hit out while on a visit to India last week.
"We cannot tolerate in any sense the idea that this country (Pakistan) is allowed to look both ways and is able, in any way, to promote the export of terror, whether to India or whether to Afghanistan or anywhere else in the world," he told an audience in Bangalore.
That came after leaked secret US military documents detailed alleged links between Pakistan's intelligence agency and the Taliban.
Cameron's remark infuriated Islamabad, especially as it was made on a visit to Pakistan's regional rival, and prompted the Pakistani government to summon Britain's representative in Islamabad for clarification.
Zardari came under pressure to cancel his trip over the controversy, while his failure to return home immediately after the flood disaster has also drawn criticism.
Cameron said Britain stood ready to provide further flood relief assistance.
He and Zardari were to plant a tree at Chequers in memory of the president's wife Benazir Bhutto, the former Pakistani premier who was assassinated in 2007.
Meanwhile Bilawal Bhutto Zardari, the couple's 21-year-old son, said he would not be launching his political career yet.
The Oxford University history graduate, who is co-chairman of the Pakistan Peoples Party alongside his father, said in a statement he intended to continue his education and was considering studying law.
"An understanding of law and an appreciation for the rule of law is important for any politician seeking to strengthen democracy in Pakistan," he said.