Defense News: DTN News: Today In World ~ In India's Jammu & Kashmir State, Rocks Are Weapon Of Choice
* For a generation of angry young men caught up in a decades-long territorial dispute, lobbing stones in protest has proved deadly, as some Indian forces respond with bullets.

Source: DTN News - - This article compiled by Roger Smith from reliable sources including By Mark Magnier, Los Angeles Times - Reporting from Srinagar, India(NSI News Source Info) TORONTO, Canada - August 15, 2010: Down a 15-foot-wide alley of shuttered shops in Srinagar's Batmaloo neighborhood, stone-throwing protesters and police face off under a blazing midday sun. Most of the rocks thrown by demonstrators miss their mark, but when one lands, a loud cheer erupts.
Dozens of officers, some with slingshots, answer in kind, roaring with glee whenever their projectiles strike protester flesh. 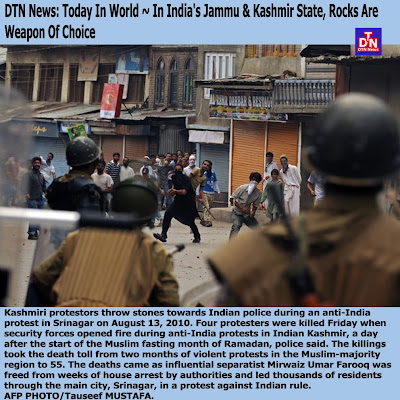 While this may look like a collection of overgrown children, it's a decidedly deadly game. At least 57 protesters have been killed since early June — including two Saturday — by security forces opening fire who opted for guns over stones against unruly mobs. Hundreds more police officers, paramilitary members and civilians have been injured here in the Indian-controlled portion of Kashmir, part of a disputed region that's sparked two wars betweenPakistan and India since 1947.
"That was a close one," said a policeman as a rock grazed his padded leg. "They're better shots, because we have to lug these guns."
Kashmir, which has witnessed more than 47,000 deaths among militants, civilians and security personnel since 1989, is experiencing its worst social unrest in a generation.
"A volcano is coming up," said Bashir Siddique, an attorney who has defended 11 stone throwers. "It can anytime burst."
The broader dispute over divided Kashmir has been going on for so long, with so many entrenched interests, that few see an obvious solution.
This month, Indian Prime Minister Manmohan Singh acknowledged in a speech the pain and anger many Kashmiris feel. He pledged to organize a group of experts to explore political solutions, and he urged economic development to encourage young people to pick up jobs, not stones.
Armed militancy in Kashmir, which peaked in 1990, has dropped sharply in recent years as rocks replace guns for a new generation of angry young men.
That's left critics here questioning why 650,000 members of the Indian security forces remain — one for every eight residents — and why stones are answered with bullets when other nations routinely defuse civil unrest without fatalities.
Of the at least 57 recent civilian deaths, nearly half were minors, one as young as 9.
Security officials counter that stone throwers — "gun-less terrorists," said one commander — are well organized and probably directed and funded by Pakistan-leaning insurgent groups.
"Police have to fire on instigators," said Taj Mohiuddin, a state minister. "There are interests and external forces responsible for this."
Local anger, meanwhile, remains palpable. On a recent morning a few blocks from the Batmaloo faceoff, several hundred young men gathered at a bypass, burning tires, upending planters and yelling "azadi!" — freedom — after a 17-year-old was allegedly fatally shot by police.
Several covered their faces to prevent identification by police photographers. "It's not because I'm a militant and have a gun," said a college student, 23, who called himself Sufi. "If I don't wear this mask, the Indian dogs will come to my house and beat us."
Protesters now tend to be better educated, informed and adept at using social networking sites, including Facebook's "Im a Kashmiri Stone Pelter," than in the past.
Although several Kashmiris lauded the prime minister's speech, they said Kashmir needs results, not more committees.
How New Delhi proceeds now could greatly influence a generation at a crossroads, many without outlets or opportunities in this tightly monitored society.
"Sometimes I feel they should have boxing rings or some way to work out their anger," said Zulfiqar Hussein, an attorney. "The same guys who can pick up stones can pick up guns. Something has to be done."
Kani jung, or throwing stones in anger, probably dates to caveman days in Kashmir, as elsewhere. Residents probably used gulail, a device that propels stones from bowed sticks, to defend themselves against 16th century Mughal invaders, said M.A. Wani, a medieval history professor at the University of Kashmir.
Rival Kashmiri parties have used rocks on each other, and at various times, Pakistan's founder, Mohammed Ali Jinnah, first Indian Prime Minister Jawaharlal Nehru and last British Viceroy Louis Mountbatten received "projectile greetings" during Kashmir visits.
"Now women are using stones, not just young men," said Sheikh Showkat Hussain, a University of Kashmir law professor. "And it's transcending generations."
One structural problem, analysts said, is that many security officers are trained to kill insurgents, not control crowds. Residents add that many Indians view Kashmiris as spoiled whiners with militant leanings.
"Villagers blame us for everything," said a paramilitary member who declined to be identified. "We're here to protect them, but they like Pakistan. We're just trying to feed our family. We don't want a fight."
At Srinagar's Nowhatta police station, the preferred tool against rock throwers for years has been an armored vehicle nicknamed Rani, with an iron-netted windshield and a chassis pockmarked with dents.
"Hundreds and hundreds of stones were thrown on her, but she never stopped or gave up on me," said officer Nisar Ahmed, 38, who compared the sound inside during attacks to a fierce hailstorm. "I thank Allah, I love her more than my children."
Studies suggest that there's no single stone-thrower type, with some motivated by youthful machismo, others by a sense of belonging, others incensed at the death of loved ones.
Hoping to blunt this fury, security officials have tried cricket matches, community policing, even debates among Kashmir's mostly Muslim population on whether stone throwing is Islamic.
In recent weeks, they have also rounded up at least 932 young men, charging some with attempted murder or public safety violations, allowing for up to two years' detention without trial.
Under Indian law, minors must be placed in juvenile detention centers. But Kashmir has none, so some are housed with hardened criminals, even Islamic militants, human rights officials said, and exposed to police mistreatment.
American author Arthur Ward once said that stones can be thrown, complained about, climbed over or used for building. After a summer of discontent, many in Kashmir wonder where down what path the stones will take them.
*Link to this article from source; "In India's Jammu and Kashmir State, Rocks Are Weapon Of Choice - By Mark Magnier, Los Angeles Times - Reporting from Srinagar, India"
mark.magnier@latimes.com
Anshul Rana of The Times' New Delhi Bureau contributed to this report.
*This article is being posted from Toronto, Canada By DTN News ~ Defense-Technology News, contact: dtnnews@ymail.com