Source: DTN News - - This article compiled by Roger Smith from reliable sources including Alex Rodriguez, Los Angeles Times
(NSI News Source Info) TORONTO, Canada - August 15, 2010: Here in Pakistan's southern Punjab province, the tawny waters of the Indus and Chenab rivers have swallowed up vast swaths of verdant rice paddies, sugar cane fields and mango orchards that usually feed the nation.
Floodwaters have submerged the village of Basti Dopiwala, leaving farmers and their families stranded on a small patch of dry land to ponder survival without the fields that sustain them. Along the banks of the Chenab, the river gently laps the boughs of mango trees that stretch to the horizon and are a source of national pride. 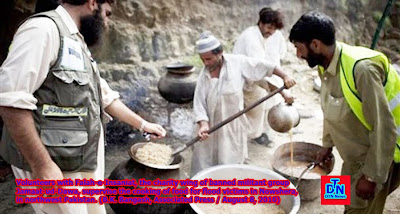 "Our mangoes are sweeter than anyone else's. The taste is God-given," said Muhammad Irfan, who owns 100 acres of mango groves along the Chenab. "But the floods also came from God, so there's nothing we can do about it."
The floods that claimed more than 1,600 lives and wrecked infrastructure in the country's mountainous northwest have now flowed south to the flatlands and wreaked havoc on agriculture, the backbone of the Pakistani economy.
On Friday, World Bank President Robert Zoellick told reporters in Latvia that the floods may have caused $1 billion in crop damage. The United Nations estimates that flooding has destroyed 1.4 million acres of crops in Punjab province, Pakistan's agricultural heartland. In many places, whole farming villages have been wiped off the map.
Those assessments paint a gloomy picture for Pakistan, a vital U.S. ally in the effort to combat Islamic militancy and stabilize neighboring Afghanistan. The country already suffers from electricity shortages, attacks by militant groups and entrenched political disputes. Pakistan touts its nuclear arsenal and nurtures a budding middle class, but remains largely an agrarian society in which the work is shouldered by millions of poor farmers.
Agriculture accounts for nearly a quarter of the country's GDP and almost half of its labor force. The Finance Ministry has projected that the disaster's effect on agriculture will keep the country from meeting its target of 4.5% GDP growth this year. Without steady growth, Pakistan will continue to struggle to support an expanding population and remain vulnerable to the militants, who exploit the nation's poorest youths.
In Muzaffargarh district, a ribbon of fertile land wedged between the Indus and Chenab rivers, locals say it will take years for farms to recover. The district's administrative chief, Farasat Iqbal, said nearly two-thirds of the region's farmland has been ruined.
"Of the 3.5 million people who live here, 2.5 million were affected by these floods," he said.
The damage done to Muzaffargarh's mango groves reaches deeper than the balance sheet. Mangoes are a source of pride in Pakistan, where the only coffee table conversation more heated than a debate about politics is a tussle over the pros and cons of the 250 mango varieties grown in the country. Secretary of State Hillary Rodham Clinton raved about Pakistan's mangoes on a visit in July. "I have personally vouched for Pakistani mangoes, which are delicious," she said.
Irfan, the mango farmer, drove this week past flooded groves that stretched for miles, struggling to take in the vastness of ruin. A relatively wealthy man, Irfan said his crop losses could amount to $64,000 — a hefty amount, but one he probably could survive. The government should compensate him, he said, but what worried him more was the long-term damage the floods inflicted on his farm, which has been in the family for at least three generations.
"We're trying to be patient," Irfan said, scanning the bloated Chenab from a dusty farm road. "But if these waters stay a long time, many trees will die. We never expected it to be this disastrous."
Elsewhere in Muzaffargarh, farmers who eked out an existence on small patches of rented land said the floods had swept away everything — homes, crops and any hope of a steady income for some time.
Water was a problem for the tenant farmers of Basti Dopiwala, even before the floods. They didn't have enough.
The Indus and Chenab rivers had shriveled, the country had been in the grips of an acute water shortage, and landowners had illegally diverted from nearby irrigation canals large amounts of water for their own use, leaving Basti Dopiwala parched.Then, two weeks ago, the skies opened up. The annual monsoon dumped record amounts of rain. Floodwaters destroyed roads, bridges, schools and hospitals in northwestern Pakistan before flowing south. This week, they reached Muzaffargarh.
Government relief efforts upstream have been harshly criticized as slow and disorganized. Officials here say they are still working out a plan to help farmers once the water recedes. Ghulam Abbas Razi, Muzaffargarh district's agriculture chief, said the government is likely to waive land taxes, write off existing farm loans and issue new, interest-free loans.
The government probably will turn to the international community for help in compensating farmers for losses from ruined crops and destroyed homes and belongings, Razi said.
Stranded on a tiny island of dry land for several days with dwindling food and drinking water supplies, the farmers of Basti Dopiwala say they're skeptical that the government will provide much of anything.
Muhammad Ramzan was able to escape with his wife, three sons and two daughters. But the floods submerged his 10 acres of cotton, two acres of rice and six acres of sugar cane, along with his small house and the rest of the village.
Huddling underneath thatched canopies to escape the searing midday sun, they've been relying on small bags of corn, wheat and dates they carried from their flooded village. The government, they say, has yet to supply them with any aid.
"We've been living off of what we could take from the house," Ramzan said. "But we can survive on this only for maybe three more days."
To make matters worse, this area is relatively far from the river. When it floods, the water tends to stay.
"I see a very bleak, gloomy future ahead," said Ramzan. "Farming is all I know, and it could be years before I get back to it."
*Link to this article from source; "Pakistan TODAY August 15, 2010 - Floods In Pakistan's South Take Huge Toll On Farmers- By Alex Rodriguez, Los Angeles Times"
alex.rodriguez@latimes.com
*This article is being posted from Toronto, Canada By DTN News ~ Defense-Technology News, contact:dtnnews@ymail.com
Posted by DEFENSE NEWS at 10:15:00 AM