Defense News: DTN News: Swiss Defense Minister Draws Fire With Billion-Euro Jet Fighter Plan
* A Swiss plan to spend billions on fighter jets has stirred up debate. As the country looks to trim public spending, with security threats at a minimum, one question is increasingly being asked: Why? 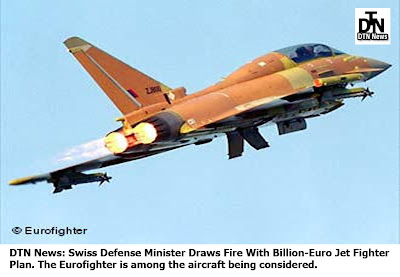 uts, many people expected defense to be a natural candidate for cutbacks.
And so there was surprise when a leaked document from the defense ministry revealed plans to increase spending, by ordering new fighter jets at a cost of up to 3.8 billion euros ($ 4.9 billion).
Defense Minister Ueli Maurer wants to replace the country's aging fleet of fighters, purchased as long ago as 1976. He would need an increase in the defense budget to pay for his plan to order 22 fighters.
Maurer is from the right-wing Swiss People's Party (SVP), traditionally strong supporters of the Swiss military. However, even some of the defense minister's party colleagues, such as Toni Bortoluzzi, are skeptical.
"We've been talking for ages about reducing the budget," said Bortoluzzi. "We're really going to have to have a discussion about this, to see whether this amount of money is available.
"Frankly, I don't think you can just spend and spend."
Politicians on the left say that Maurer is planning to spend tax payers' money needlessly, in an effort to raise his profile within the SVP, a member of the governing coalition.
"I have the feeling the defense ministry has come up with a wish list, so that the defense minister himself can look like a great friend of the army – above all to get the support of his own party," said Evi Allamann of the Social Democrat party.
"The fact is these proposals, in this day and age, will do little or nothing for our national security."
Under the Swiss political system, voters could still vote down the plan in a national referendum.
Peter Malama of Switzerland's centre-right FDP party said he did not believe that people, or other politicians, would agree to spend such a sum.
"As a strategy, in the context of what our army needs to do in today's global security situation, 5 billion is at least one billion too much.
"What's more I think these plans are delusional, completely unrealistic, and most important, they will never, ever, get a political majority."
Contenders for the plane-building contract include the Anglo-German-Italian Eurofighter, built by EADS with BAE Systems and Finmeccanica; France's Rafale, built by Dassault Aviation; and the JAS 39 Gripen, built by Sweden's Saab.
*This article is being posted from Toronto, Canada By DTN News ~ Defense-Technology News, contact: dtnnews@ymail.com
Posted by DEFENSE NEWS at 10:51:00 AM