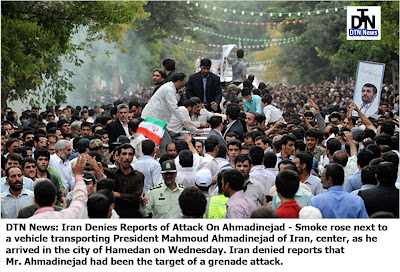 prompted swift and vigorous denials by the Iranian government on Wednesday, which said that a firecracker had been thrown some distance from the presidential motorcade, according to Iranian news media. By all accounts, Mr. Ahmadinejad was unhurt.
Press TV, the state-run satellite broadcaster, quoted an unidentified “informed source” in the presidential office as saying the reports of an attack were false.
“Some foreign news sources published reports that a grenade exploded near the motorcade of President Ahmadinejad during his visit to the western city of Hamedan on Wednesday,” Press TV said. “The source denied the allegation, saying no such attack had happened.”
ISNA, the Iranian Students News Agency, said a firecracker went off while Mr. Ahmadinejad “was being welcomed” in the city, causing no injuries.
According to Khabar Online, a government-licensed news service, the firecracker was thrown at a minibus carrying journalists in the presidential motorcade, about 100 yards behind the vehicle carrying Mr. Ahmadinejad. The person who threw the firecracker was arrested, the news service said.
Earlier, Reuters quoted an unidentified source in President Ahmadinejad’s office as confirming that the Iranian president’s motorcade had come under an attack on Wednesday but that he had escaped unharmed.
The source was quoted as saying that a homemade explosive device had exploded as the president was traveling from an airport in Hamedan to give a speech in a sports arena. One person had been arrested, according to the source quoted by Reuters.
Mr. Ahmadinejad later appeared on live Iranian television at a sports stadium in Hamedan, Reuters reported. He was apparently well and did not mention an attempted assault.
On Monday, in a speech in Tehran, Mr. Ahmadinejad said he believed Israel had “hired mercenaries to assassinate me.”
Iran Related News;
*Ahmadinejad attack 'was firework' Aljazeera.net - ‎1 hour ago‎
*Ahmadinejad unhurt after motorcade explosion AFP
*Iran Denies Attack on Ahmadinejad Wall Street Journal
*Sydney Morning Herald - Voice of America - Sky News - Christian Science Monitor
Posted by DEFENSE NEWS at 1:06:00 PM