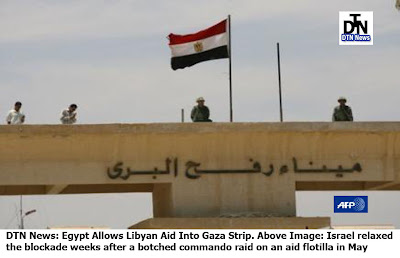 onnes of medical aid unloaded from a Libyan ship into the blockaded Palestinian Gaza Strip enclave, an official said on Wednesday.
A further nine trucks loaded with foodstuffs brought by the aid ship, the Jerusalem 5, will be sent to Gaza through an Israeli crossing with Egypt, said North Sinai governor's assistant Osama el-Sirgani.
The vessel, which docked in the port of El-Arish on Tuesday, was organised by several Libyan charities which say they will send another ship after the Muslim holy month of Ramadan, which will end in the second week of September.
An organiser said the ship carried about 1,000 tonnes of aid for the Gaza Strip, which Israel blockaded in 2007 after the Islamist Hamas group took it over.
Israel relaxed the blockade weeks after a botched commando raid on an aid flotilla in May left nine pro-Palestinian Turkish activists dead.
Egypt responded to that incident by indefinitely opening its Rafah border crossing, the only passage to Gaza not controlled by Israel.
A ship sponsored by a charity group run by the Libyan leader's son Seif al-Islam Kadhafi was diverted to Egypt earlier this month by Israel's navy.
Kadhafi told an Arab newspaper at that time that Israel would allow reconstruction material sent by Libya into Gaza, which was devastated during a three week war in December 2008.
Related News
*Group pledges new aid flotilla to Gaza this year
*Israel hopes UN flotilla probe will help Turkey ties
*Captured Israeli soldier family appeals to Palestinians
*Related Hot Topic: Gaza
Posted by DEFENSE NEWS at 1:04:00 PM