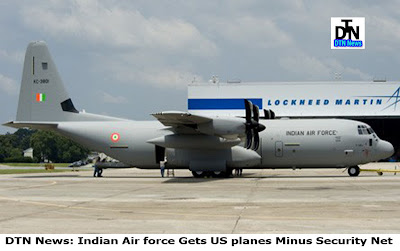 10: New Delhi, Aug. 2: The Indian Air Force has contracted six aircraft for the special forces for $1 billion without military-grade secure equipment because Washington denied the technology after New Delhi refused to sign a communications secrecy pact.
The air force is now in the process of contracting another 10 very heavy strategic airlifters under the same technology-denial regime for an estimated $3 billion.
India contracted six C-130J Super Hercules in 2007 and the first of these aircraft is likely to be delivered by January 2010 ahead of schedule by its maker, Lockheed Martin, under a government-to-government foreign military sales programme.
One of the scenarios in which the Hercules (“Hercs” for short) is to be used involves inserting special airborne troops (paratroopers) by flying into hostile territory where an adversary can try to intercept and/or jam electronic communication.
“We are aware that some of the equipment we desire may not be available. But it is up to us to use the platform the way we want to with modifications once we have it,” a senior air force officer told The Telegraph.
A US defence official told this newspaper “anything that requires encryption, which includes military-grade global positioning systems (GPS)” will not be mounted on the C-130J or the C-17 Globemaster III (made by Boeing) because India has not yet signed the Communications Inter-Operability and Security Memorandum of Agreement (CISMOA).
The CISMOA was proposed by the Pentagon to the Indian defence ministry in 2006. A standard text for another crucial agreement, the End-User Monitoring Arrangement, was agreed last year after more than three years of negotiations.
A secure GPS is indispensable for mobile military platforms that are designed to track targets in all-weather and all-time circumstances.
“The military GPS system is encrypted and thus not available without a communications agreement,” the US defence official said. He claimed that “US military equipment is designed utilising the best systems available, such as military-grade GPS, which is more accurate and less likely to be spoofed (intercepted) than civilian GPS”.
Asked if there was any way India could access the equipment without signing the CISMOA, he replied “there is no way around this”. He said the CISMOA would apply to the proposed sale of the C-17 also. Trials for the aircraft were completed last month and the Indian Air Force has decided to buy it.
The four-engine turbo-prop Hercs — a workhorse for the US military — is a “tactical airlifter” with a payload capacity of 20 tonnes or about 120 fully-equipped airborne troops capable of landing on dirt strips and with short take-off and landing capability.
The giant C-17 jet is also rugged but capable of flying much longer distances with much heavier payloads. The Indian Air Force has projected a dire need for these two different classes of aircraft because its Russian/Soviet-origin aircraft are outdated.
The air force is set to order six more Hercs in addition to the six already contracted. The Coast Guard and the Border Security Force are also in line to acquire two Hercs each.
The Hercs are to be based at Hindon, just east of Delhi, where the Indian Air Force base is being refurbished. The Hercs for India have been modified for special missions and are equipped with an infrared detection set for low-level flying in adverse conditions.
Although the communications systems would not have the desired level of security for the Indian Air Force, an official said that India was getting the Hercs with the configuration it wants. They will have self-protection and mid-air refuelling ability. The Hercs is in service in 10 countries.
*This article "Indian Air force Gets US planes Minus Security Net - The Telegraph - Calcutta, India by Sujan Dutta" & link to read in originality form....click here.
*This article is being posted from Toronto, Canada By DTN News ~ Defense-Technology News, contact: dtnnews@ymail.com
Disclaimer statement
Whilst every effort has been made to ensure the accuracy of the information supplied herein, DTN News ~ Defense-Technology News cannot be held responsible for any errors or omissions. Unless otherwise indicated, opinions expressed herein are those of the author of the page and do not necessarily represent the corporate views of DTN News ~ Defense-Technology News.
Posted by DEFENSE NEWS at 4:49:00 AM