* Airbus show tally 112 planes worth $11.8 billion
* Wizz Air signs commitment for 50 A320s
By Matthias Blamont
PARIS, June 18 (Reuters) - Airbus almost doubled its tally of plane orders and commitments at the Paris Air Show on Thursday with a pledge from European low-cost carrier Wizz Air to buy 50 A320 aircraft worth about $3.8 billion.
Sales chief John Leahy, struggling to ink new orders in a tough economic environment and an industry downturn, told Reuters at the show that he was hopeful of announcing another significant order on Friday at Le Bourget. 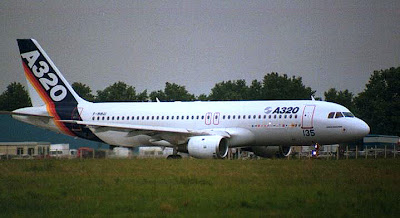 "We are still in the middle of negotiations with the company concerned," Leahy said.
The memorandum of understanding (MoU) from Hungary-based airline Wizz took the deals announced by Airbus at the world's biggest air show to 112 aircraft worth about $11.8 billion, based on list prices.
"The MoU should be signed very quickly," Leahy said. "If we had waited a few hours, we would have signed a firm order. There are still some details to finalise."
Expectations were low in terms of orders for Airbus and U.S. rival Boeing (BA.N) at this year's air show in Paris as airline customers tighten their belts in the face of a global economic downturn, declining air travel and tougher credit conditions.
The world's carriers are expected to lose some $9 billion this year, according to industry group IATA.
Airbus has unveiled 57 firm orders worth about $6.3 billion at the Paris Air Show. The biggest deal was to supply 10 A350-900s worth $2.4 billion to Malaysian long-haul, low-cost carrier AirAsia X, with options on five more of the planes.
At last year's air show in Farnborough, which alternates each year with Paris, total orders and commitments for Airbus and Boeing amounted to over $64 billion, with new announcements for 186 firm orders worth $26.39 billion. [ID:nL17806195]
Leahy said this week he was still targeting just 300 gross orders this year. Airbus had 777 net orders last year.
Privately-held Wizz Air, which has ordered 132 Airbus A320s and already operates a fleet of 24 of the planes, said earlier this year it planned to double its fleet over the next two years as it takes on rivals SkyEurope, EasyJet (EZJ.L) and Ryanair (RYA.I). [ID:nLJ379563] Airbus customer China Eastern Airlines (600115.SS) (0670.HK) said separately on Thursday that it would stick with a plan to buy 20 Airbus A320s in coming years after postponing or cancelling half of the deliveries it had expected this year.
The purchase was part of a bulk order of 150 aircraft placed with Airbus by the Chinese government in November 2007. The order does not count towards Airbus' 2009 target and is still pending regulatory approval.
Posted by DEFENSE NEWS at 9:39:00 AM