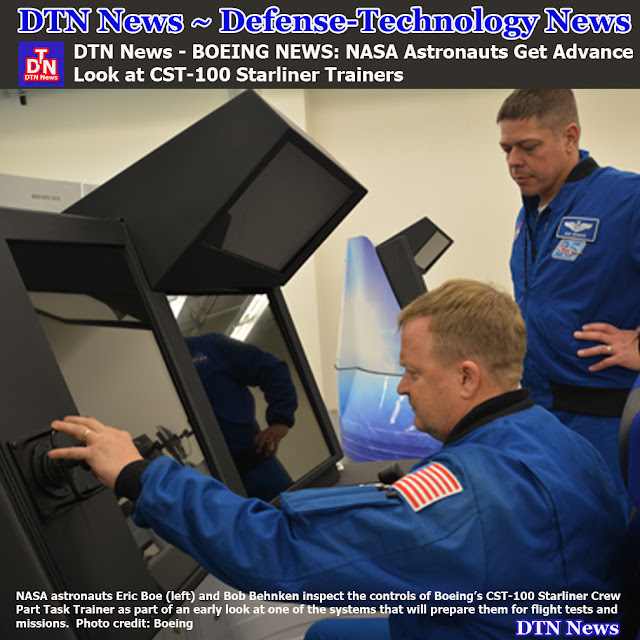 During a visit to Boeing, astronauts Eric Boe and Bob Behnken focused on systems used for learning to manipulate switches and display panels. Flight controllers were also able to experience devices they will use to train for flight tests and missions.

“We have been learning about the spacecraft displays through slideshows. It’s great to finally see what we are actually going to train on,” Boe said. ”The trainers look great, and this visit gives us an opportunity to meet with the Boeing engineers. We appreciate them allowing us to give input on these trainers so the devices are ready when they arrive at Johnson Space Center.”

Behnken added that the training equipment is comprehensive.

“Historically, some trainers were just a simple component that might have a very specific task,” he said. “This one has a lot of capability with multiple tasks coming together so it can execute more complicated training scenarios.”

Two of the trainers are to be delivered to NASA in the autumn of 2016. Boeing is also building an immersive, high-fidelity training system that’s to be delivered in early 2017 to Houston’s Johnson Space Center.

The CST-100 Starliner’s first crew flight test to the space station is expected in 2017 and will be Boeing’s first commercial flight transporting humans to that destination. More information about the CST-100 can be found at www.Boeing.com/cst100.

A unit of The Boeing Company, Defense, Space & Security is one of the world's largest defense, space and security businesses specializing in innovative and capabilities-driven customer solutions, and the world’s largest and most versatile manufacturer of military aircraft. Headquartered in St. Louis, Defense, Space & Security is a $31 billion business with about 50,000 employees worldwide. Follow us on Twitter: @BoeingDefense.