Source: DTN News - - This article compiled by K. V. Seth from reliable sources Defense News(NSI News Source Info) TORONTO, Canada - May 31, 2015: Kamaz Typhoon is a family of Russian multi-functional, modular, armoured, mine resistant MRAP vehicles. The Typhoon family is part of Russia's Typhoon program launched in 2010. Both Kamaz and Gaz-Group are taking part in Typhoon program and develop their own family of vehicles. 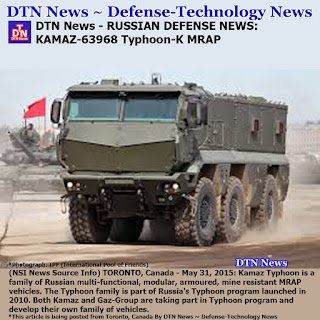 Kamaz already develop the KAMAZ-53949 Typhoon-K 4x4 modular armoured and Gaz the Ural Typhoon 6x6 multi-purpose armoured truck. Kamaz-63968 6x6 Typhoon-K (Taifun) has a mass of 21 tonnes and can carry up to 16 people in its personnel compartment.
Kamaz-63969 Typhoon is an advanced, special-purpose mine-resistant armoured wheeled vehicle designed and manufactured by KAMAZ, a truck maker based in Russia, for the Russian Army.
The new generation 6x6 armoured vehicle can be deployed in reconnaissance, surveillance, command and staff, engineer reconnaissance, medical evacuation, nuclear, biological and chemical (NBC) reconnaissance and surveillance, fire support, special attack and armed escort missions.
The Typhoon MRAP can also be used to convoy other vehicles for combat missions and to transport soldiers, medical units and other equipment. It offers increased protection for troops in high threat environments.
The Kamaz Typhoon family of 6x6 armoured vehicles also consists of Kamaz-63968 (Typhoon-K) vehicle, which can accommodate two crew and up to 16 troops. The vehicle took part in the Interpolitex-2013 security exhibition in October 2013. A total of 14 Typhoon-K vehicles participated in Russian Victory Day military parade held in May 2014 in Moscow.
The Kamaz-63969 armoured vehicle has been developed under the Typhoon (Tayfun) MRAP programme, which is part of the Russian Federation Armed Forces' plan to produce military vehicles for the period up to 2020. The programme was initiated in January 2010. The Typhoon was originally demonstrated during an exhibition in Bronnizy, Russia in 2011.
The first prototype was completed and demonstrated to the Russian military department in June 2013. The Kamaz-63969 was also exhibited during the Russian Arms Expo (RAE) 2013 and the Kazakhstan Defence Expo (KADEX) 2014.
Kamaz-63969 Typhoon design and featuresThe Kamaz-63969 MRAP-type vehicle features monocoque hull made from new armoured steel. It incorporates on-board information systems, control units, sensors and a number of advanced defence solutions.
The armoured vehicle is 7.8m long, 2.52m wide and 2.75m high. It has a kerb weight of 19,703kg and a gross weight of 23,703kg.
The Typhoon can carry two crew and up to ten soldiers. Its cockpit is fitted with two monitors to display the information of the vehicle. The functional area is also fitted with a monitor.
Armament of Kamaz-63969The Kamaz-63969 Typhoon is armed with a remotely controlled weapon system provided by Elektromashina JSC. The weapon station is mounted with PKT machine guns with the Russian 7.62?54mmR calibre rounds.
A rocket propelled 30mm AGS-30 automatic grenade launcher can also be mounted on the weapon station. It can store up to 30 rounds of ammunition and can fire belt-fed GPD-30, VOG-30 and VOG-17M 30mm grenade rounds at a rate of 400 rounds per minute. The 16.5kg grenade launcher is fitted with a day-night sight and has an effective firing range of 2,100m.
Protection features of Kamaz-63969 TyphoonThe versatile Kamaz-63969 Typhoon armoured vehicle is equipped with enhanced protection features. It is built using integrated ceramic armour for all-round protection against 14.5mm bullets, B-32 armour-piercing shells and high-explosive armour-piercing incendiary bullets.
The vehicle also features glass cover and bulletproof windows for protection against large-calibre firearms in the combat environment. The mine resistant seats provide enhanced protection to the crew and troops against land mines. The vehicle can also be protected from blast effects equivalent to 8kg of TNT.
Kamaz-63969 engine and mobilityThe 6x6 Kamaz-63969 Typhoon vehicle is powered by KAMAZ 740/354-450, V8 diesel engine that generates a maximum output power of 330.9kW and a maximum torque of 190kgm. It is also equipped with independent, hydropneumatic suspension and automatic transmission system.
The vehicle is fitted with 10.00-20 wheels and 16.00 R20 bullet-resistant tires with blast-resistant inserts. It can attain a maximum speed of 105km/h on road and has a ground clearance of 0.47m and gradient of 60%. The maximum range of the Kamaz-63969 is 1,200km.
*Contents - Army-Technology.com 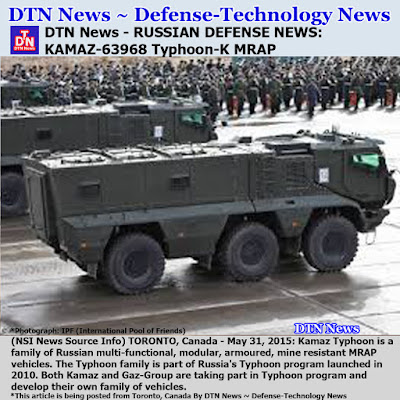 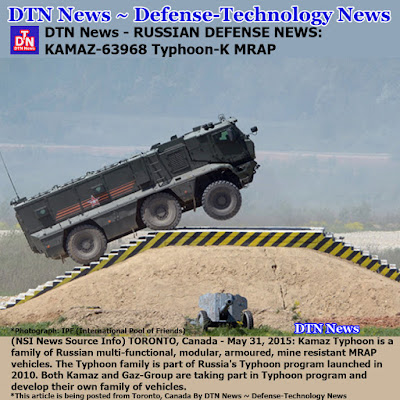