Source: DTN News - - This article compiled by K. V. Seth from reliable sources Stratfor(NSI News Source Info) TORONTO, Canada - June 26, 2014: Concerns that violence in Iraq could disrupt supplies have stoked volatility and driven international benchmark Brent above $114 a barrel. OPEC is ready to pump extra oil in the event of any supply disruptions caused by Iraq and its biggest producer, Saudi Arabia, can ramp up to capacity if needed, oil officials said on Tuesday. For now the market is well-supplied and prices above $114 a barrel are the result of market nervousness, OPEC Secretary General Abdullah al-Badri said. Here’s a look at Iraq’s oil and gas production.

The conflicts in Syria and Iraq are connected. The border between the two countries has become meaningless, and the emerging crisis in Iraq has direct consequences on the fighting in Syria. Neither the Syrian regime nor the rebels that oppose it stand to gain a decisive advantage from the Islamic State in Iraq and the Levant's recent actions in Iraq. As things stand now, the primary beneficiary will be the Islamic State in Iraq and the Levant itself.

Because of the way its military advance in Iraq has played out, the Islamic State in Iraq and the Levant has earned prestige and a propaganda boost -- it is viewed as a competent organization capable of decisive results. This growing perception will be crucial in the group's ability to attract a growing share of the foreign fighters heading toward the region, and possibly draw additional Syrian rebel fighters to its ranks. The group's seizure of weapons and vehicles -- much of this equipment taken from retreating Iraqi soldiers -- and reportedly more than $1 billion in funds during the recent Iraq offensive will only increase its attractiveness to jihadist fighters.

Click to Enlarge
The equipment taken includes armored vehicles, small arms, ammunition, artillery, communication devices, uniforms and logistical vehicles. The Islamic State in Iraq and the Levant may have also seized night vision equipment and air defense weaponry. This gear would provide a substantial boost on the battlefield in Syria, and the group has indeed already begun to transfer some of this equipment across the border.
The growth in the Islamic State in Iraq and the Levant's prestige could in theory have detrimental effects on the rebels and on the Syrian regime. Since the transnational jihadists serve the cause of neither, their efforts in Iraq will create a mixed set of variables for the combatants in Syria.

Effects on the Syrian Regime

Perhaps the greatest negative consequence for the regime of Syrian President Bashar al Assad is the shift of Iraqi Shiite militants back to their homeland to confront a resurgent Sunni opposition. The Syrian regime has come to rely heavily on foreign fighters -- be they Hezbollah combatants, Islamic Revolutionary Guard Corps advisers or Shiite volunteers from across the region -- to bolster its ranks and negate its demographic disadvantage. These foreign fighters, most notably the Hezbollah members, played a critical role in halting the string of defeats that beset the regime in late 2012, and they continue to spearhead regime offensives across Syria. Furthermore, and unlike what has happened with the Syrian rebels, the regime has not suffered from divisive infighting due to the influx of foreign fighters.

With the Islamic State in Iraq and the Levant and its allies advancing south toward Baghdad from Mosul, and with sectarian emotions flaring across the region, Iraqi Shiite fighters are keen to return to their homeland -- they have made this desire abundantly clear in statements and videos. Even Hezbollah has threatened to dispatch fighters to Iraq. Though Hezbollah is unlikely to shift much of its efforts from Syria to Iraq -- partly for logistical reasons, but mostly due to the regime's critical dependence on the group -- it will probably move additional fighters to Syria to help offset losses of Iraqi militia. There is already substantial evidence that thousands of Iraqi Shiite fighters are on their way home. Iraqi fighters have reportedly withdrawn from Syrian fronts in the coastal province of Latakia and in al-Meliha, in the suburbs of Damascus, while witnesses have reported seeing convoys of trucks leaving the football stadium that served as the Iraqi militia base in the northern city of Aleppo.

The Islamic State in Iraq and the Levant's current focus on Iraq has also wrought a notable decline in the intensity of rebel infighting. In the months prior to the fall of Mosul, rebel infighting in Deir el-Zour province in particular resulted in hundreds of rebel casualties as Jabhat al-Nusra and its rebel allies battled against Islamic State in Iraq and the Levant fighters. Though these clashes continue, particularly in Aleppo and Deir el-Zour provinces, the intensity of the fighting has markedly decreased, a clear sign that the Islamic State in Iraq and the Levant has turned its attention, and likely a large number of its fighters, to Iraq. It could always move its forces back across the unrecognized border, but for now, the group appears to be prioritizing Iraq and will likely keep reinforcing its fight there against Iraqi government counteroffensives. 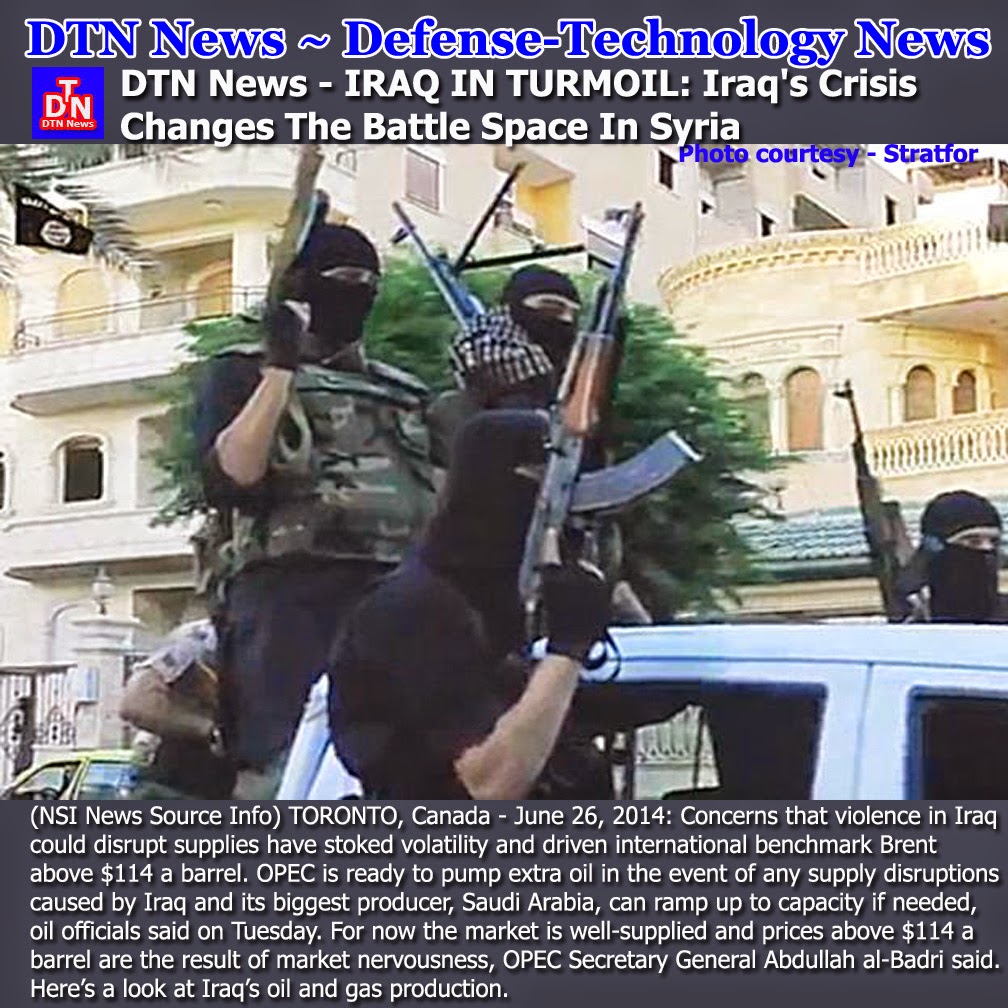 It is clear that the fall of Mosul and the spike in the fighting in Iraq have further complicated an already elaborate regional conflict where borders are fast losing their importance. For the Syrian battle space, the developments in Iraq bring a mixed array of advantages and disadvantages to the varying combatants. Even if it does not decisively tilt the battle, the Islamic State in Iraq and the Levant's Iraq pivot will play an important role in the conflict in Syria.
Read more: Iraq's Crisis Changes the Battle Space in Syria | Stratfor
Follow us: @stratfor on Twitter | Stratfor on Facebook*Link for This article compiled by K. V. Seth from reliable sources Stratfor*Speaking Image - Creation of DTN News ~ Defense Technology News *Photograph: IPF (International Pool of Friends) + DTN News / otherwise source stated*This article is being posted from Toronto, Canada By DTN News ~ Defense-Technology News Contact:dtnnews@ymail.com ©COPYRIGHT (C) DTN NEWS DEFENSE-TECHNOLOGY NEWS