Defense News: DTN News - SPECIAL REPORT HURRICANE SANDY: Hurricane Sandy Hammers The Northeast USA
* A region-by-region look at the destruction so far and what to expect

Source: DTN News - - This article compiled by Roger Smith from reliable sources National Post(NSI News Source Info) TORONTO, Canada - October 29, 2012: Hurricane Sandy is churning off the East Coast and is expected to join up with two other weather systems to create a huge and problematic storm affecting 50 million people. Here’s a snapshot of what is happening or expected, region by region.
ONTARIO
Ontario residents are urged to make preparations ahead of the heavy rainfall and high winds from Hurricane Sandy. Southern and eastern Ontario are expected to be hit by the super storm, with heavy rainfall and potentially damaging winds up to 100 kilometres per hour. “The Canadian Red Cross encourages all Canadians to take some steps to ensure their safety. Be prepared to take care of yourself and your family for at least 72 hours in an emergency,” Denis Dion, national director of disaster management for the Canadian Red Cross, said in a statement. “By taking some time now to store emergency food, water and other supplies, you can provide for your entire family during a power outage or evacuation.”
Read more…
QUEBEC
Along with Ontario, Quebec will likely see the strongest winds, with gusts up to 100 kilometres per hour and between 20 to 40 millimetres of rain, although higher amounts are possible in some areas. That will make for a soggy day, but that level isn’t enough to trigger a rainfall warning.

MARITIMES
Starting Tuesday morning, the Maritime provinces will see a lot more rain — up to 100 millimetres — and weaker winds than Ontario, though still strong at an expected 70 kilometres per hour.
CAROLINAS
The U.S. Coast Guard rescued 14 members of a crew forced to abandon a Canadian-built tall ship about 144 off the North Carolina coast and continued to search for two other crew members. The storm lashed barrier islands and rendered several homes and businesses nearly inaccessible.
CONNECTICUT
The University of Connecticut is closing Tuesday, joining a hundreds of other schools and school systems across the state. The closure includes UConn’s law school and the UConn Health Center, though the John Dempsey Hospital will remain open during the storm. Power outages: 55,000.
DELAWARE
Dover Air Force Base has relocated some aircraft in anticipation of the storm, and the Federal Emergency Management Agency has requested that the base be used as a staging area for support and supplies. Some residents of low-lying areas of the base have been ordered to evacuate.
KENTUCKY
Sandy is expected to bring snow to far southeastern Kentucky. A winter storm warning is in effect in Harlan, Letcher and Pike counties through Wednesday morning. Forecasters say snow could accumulate from 4 to 10 inches in high elevations and 1 to 3 inches in lower elevations.
MAINE
Virtually all Maine public schools opened Monday but some were closing early before the heaviest rain and wind from Hurricane Sandy. State officials say the biggest concern is wind, which is expected to cause widespread power outages. The state’s utilities say they have crews poised to deal with expected power outages, including some from Canada. Power outages: 5,700.
MARYLAND
Maryland Gov. Martin O’Malley has closed the Bay Bridge because of the storm. The bridge spans the Chesapeake Bay, connecting the state’s eastern and western shores. Hurricane Sandy already has caused heavy damage to a large, iconic ocean pier in the Maryland beach resort of Ocean City.
MASSACHUSETTS
Voluntary evacuation recommendations have been issued in Scituate, Lynn, New Bedford and Plum Island. The recommendations are for just certain sections of the communities that could be affected by flooding as a result of Hurricane Sandy. A Red Cross spokeswoman said just a few people stayed at its shelters Sunday night, but she expects more people Monday night and into Tuesday. Power outages: 56,000.

REUTERS/Gary HershornA workman cuts a tree in pieces after it fell on top of a car in Hoboken, New Jersey, October 29, 2012. Hurricane Sandy, one of the biggest storms ever to hit the United States, battered the densely populated East Coast, shutting down transportation, forcing evacuations in flood-prone areas and interrupting the presidential election campaign.
MICHIGAN
Michigan utilities say high winds could cause power outages in the state and they’re keeping an eye on the weather to respond to power problems. DTE Energy Co. said gusts of 50 mph Monday evening and Tuesday could affect some it its 2.1 million customers.
NEW HAMPSHIREGov. John Lynch has urged all drivers to be off the roads by 3 p.m. as Hurricane Sandy approaches. Lynch declared a state of emergency and directed that non-essential state workers be released from work Monday afternoon. He urged employers to consider releasing workers early. The governor has put 100 New Hampshire Guard soldiers on active duty. Power outages: 47,400.

Kevin Lamargue / ReutersA wall of water batters what remains of the fishing pier in Ocean City, Maryland as Hurricane Sandy intensifies October 29, 2012. About 50 million people from the Mid-Atlantic to Canada were in the path of the nearly 1,600-km-wide storm, which forecasters said could be the largest to hit the mainland in U.S. history.
NEW JERSEY
All roads into and out of Ocean City are closed due to flooding that has cut off the popular Jersey shore resort community. Hurricane Sandy already had flooded most of Atlantic City, sweeping away an old section of the city’s famed boardwalk. Power outages: 95,000.
NEW YORK 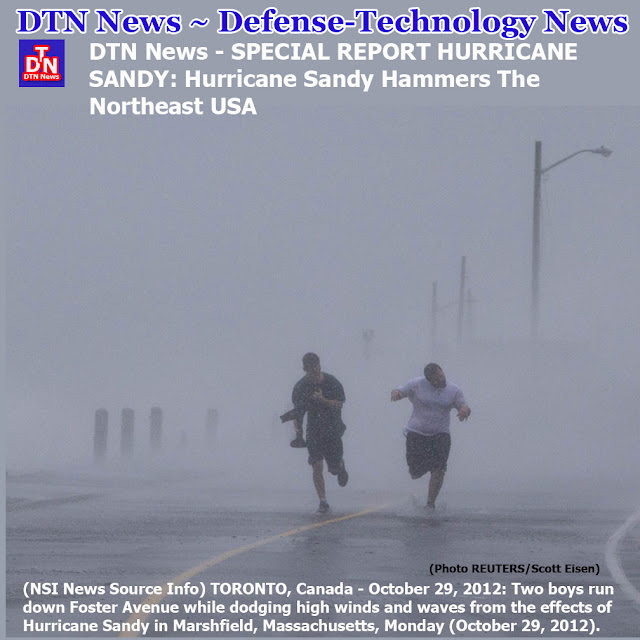 New York City Mayor Michael Bloomberg said the city’s public schools will remain closed on Tuesday after being shut down Monday. Earlier, Gov. Andrew Cuomo said the Brooklyn-Battery Tunnel and Holland Tunnel would close at 2 p.m. Monday. Airports in the metropolitan New York City area are open, but air carriers are not operating. Power outages: 263,000.
OHIO
Residents of low-lying areas and along Lake Erie were told to watch for flooding; utilities are anticipating high winds that could blow down trees and poles. Snow is forecast in some areas.
PENNSYLVANIA
Officials from the state transit agency and the Pennsylvania Turnpike have instituted speed restrictions over concerns about high winds and ordered certain vehicles, including empty trucks and motorcycles, off some highways. The National Weather Service says southeastern Pennsylvania could get winds reaching 75 mph and rainfall up to 10 inches. Power outages: 25,000.
RHODE ISLAND
Officials are concerned about wind driving water north up Narragansett Bay, which could create flooding in low-lying areas of the upper bay, including Providence, Warwick and Cranston. About 2,600 National Grid customers were without power, mostly in Barrington and other parts of Bristol County. Power outages: 12,000.
TENNESSEE
Snow is expected in higher elevations, where a freeze warning has been issued. High winds are expected in many areas.
VERMONT
Gov. Peter Shumlin declared a state of emergency to provide access to National Guard troops in a state still recovering from the devastating effects of the remnants of Hurricane Irene. Culverts and storm drainage basins in some spots have been cleared of debris. Power outages: 4,000.
VIRGINIA
A curfew is in place on Virginia’s swamped Chincoteague Island. Officials say the entire 37-square-mile island is underwater, and there is no way off the island because a causeway to the mainland has been closed. The 3,500 islanders who decided to tough out Hurricane Sandy have been told to keep off the streets. Power outages: 9,500.
WASHINGTON, D.C.
Taxis that originate in Washington are authorized to add an emergency flat rate of $15 per trip because of Hurricane Sandy, starting Monday. The price is supposed to expire at noon Tuesday, but can be extended if considered necessary. The capital area’s transit system shut down rail service for the first time since 2003. Power outages: 2,300.
WEST VIRGINIA
Gov. Earl Ray Tomblin declared a state of emergency Monday for West Virginia, where Sandy is expected to bring high winds and heavy rains and leave behind flooded towns and as much as 3 feet of snow on the state’s highest ridge tops. Eastern parts of the state can expect to get up to 6 inches of rain. Fourteen counties are under blizzard warnings.
WISCONSIN
With waves expected to reach as high as 33 feet Tuesday on Lake Michigan, the Port of Milwaukee is taking steps to protect its docks and boats. The superstorm bearing down on the East Coast Is expected to create dangerous conditions on the Great Lakes. The National Weather Service issued gale and storm warnings for the lakes through Wednesday.