Defense News: DTN News - TECHNOLOGY NEWS: Facebook IPO Triggers Retail Investor Craze
*Facebook Value Up To $104 Billion - Company Hikes IPO Price Range*Already expected to be the largest initial public offering for an Internet company, Facebook is making its IPO even bigger.The world’s largest online social network on Tuesday increased the planned price range for its stock to $34 to $38 per share in a filing with the U.S. Securities and Exchange Commission. That’s up from its previous range of $28 to $35. At the upper limit of $38, the sale would raise about $12.8 billion.The move, which valuesFacebook as high as $104 billion, comes amid growing investor excitement about the offering. Analysts are comparing the frenzy surroundingFacebook’s IPO to Google Inc.’s in 2004, though in sheer size the latter pales in comparison.At the same time, half of Americans think the expected value for Facebook Inc. is too high, according to a new Associated Press-CNBC poll conducted before the company raised its expected stock price on Tuesday. Only one-third of those surveyed said they think Facebook’s expected value is appropriate.

Source: DTN News - - This article compiled by Roger Smith from reliable sources By Alistair Bar and Olivia Oran - Reuters (NSI News Source Info) TORONTO, Canada - May 16, 2012: If "Facebook For Dummies" helped you find friends and post pictures on the world's No. 1 online social network, then consider "Facebook IPO Confidential" which purports to teach you "How To Get Rich With The IPO Of The Century." 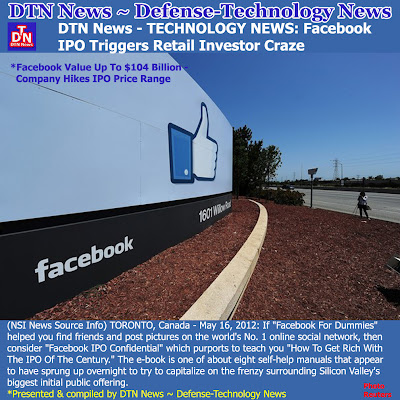