Source: DTN News - - This article compiled by Roger Smith from reliable sources By Cheryl Pellerin - American Forces Press Service & 'Pak Wants US To Apologise For Salala' - The News(NSI News Source Info) TORONTO, Canada - May 21, 2012: Representatives from 50 nations that contribute to the International Security Assistance Force in Afghanistan will decide today on the next milestone for the transition in Afghanistan, President Barack Obama said here today. 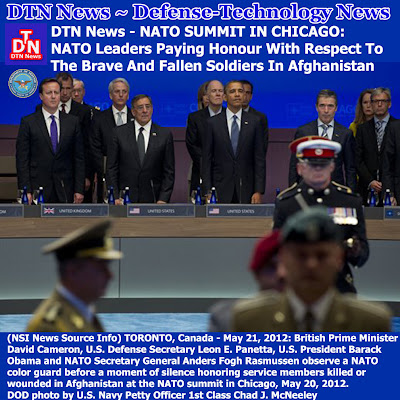 On the second day of the NATO summit in Chicago, the president and NATO Secretary General Anders Fogh Rasmussen made statements before the closed meeting.
Obama spoke from his place at the circle of tables formed around the blue NATO logo. About 250 heads of state and other officials were in attendance.
At today’s summit meeting, the president said, attendees “will set a goal for Afghan forces to take the lead for combat operations across the country in 2013, next year, so that ISAF can move to a supporting role.”
This will be another step toward the goal of having Afghans take the full lead for their security by the end of 2014, when the ISAF combat mission will end, Obama added.
NATO and its partners aim to preserve the coalition’s hard-won progress in Afghanistan, he said.
“The strategic partnership agreement that President [Hamid] Karzai and I signed in Kabul ensures that as Afghans stand up, they will not stand alone,” the president said. “Today we can agree on NATO's long-term relationship with Afghanistan beyond 2014, including our support of Afghan security forces.”
Two years ago at NATO’s summit in Lisbon, Portugal, Obama said, coalition nations agreed on a framework for transition in Afghanistan that would allow a responsible drawdown of the war by the end of 2014, and afterward allow for a long-term partnership with Afghanistan and the Afghan people.
Important progress has been made during the past two years, the president added.
“Our forces broke the Taliban's momentum, more Afghans are reclaiming their communities, Afghan security forces have grown stronger, and the transition that we agreed to in Lisbon is well under way,” he said.
Last week saw more progress, Obama said.
“We very much welcome President Karzai's announcement of the third group of areas to begin transition,” he said. “This means that 75 percent of the Afghan people live in areas where Afghan forces will be moving into the lead.” This phase will see 122 more districts across the nation transition to Afghan control, Karzai said May 17.
In his remarks before the morning session, the secretary general said that as Afghan forces step up, coalition forces will step back into a supporting role, focusing on training, advising and assisting Afghan partners.
“By the end of 2014, Afghan forces [will] have assumed full security responsibility throughout Afghanistan. By end of 2014, the ISAF operation will terminate and the NATO-led combat mission will end,” Rasmussen said.
But the commitment of NATO and the international community in Afghanistan is for the long term, said he added.
“From 2015, we expect to maintain a NATO-led presence to train, advise and assist the Afghan security forces,” Rasmussen said. “And NATO and ISAF nations will also pay their share to help sustain the army and police Afghanistan needs for the coming years. We all remain committed to our goal: a secure and democratic Afghanistan in a stable region.”
Obama said the region and the world have a profound interest in an Afghanistan that is stable, secure and not a source of attacks on other nations.
“And today, as always,” the president said, “our thoughts are with our brave forces who are serving in this vital mission.”
'Pak Wants US To Apologise For Salala' - The NewsHours before the start of Nato summit in Chicago on Sunday, Pakistan Ambassador in the US, Sherry Rehman called for the US administration to execute Pakistan's five demands to salvage the relationship between the two countries.In her write-up published today in foreign media, Sherry Rehman topped the five-point demand list with the tendering of apology by the US for Salala attacks that killed 24 Pakistan soldiers.She said significant progress could be made towards resetting the bilateral relationship if the US tenders apology for Salala attacks, reimburses CSF, enhances sharing of intelligence, ceases the drone attacks and shifts to policy of trade not aid."The US and Pakistan have had a rocky year. The unilateral raid on Abbottabad, the Raymond Davis CIA provocation, the U.S.-led NATO air assault in Salalah that tragically killed 24 Pakistani soldiers and the continuing unauthorized drone attacks on Pakistani soil have frayed our 60-year special relationship," Sherry Rehman said.If the war against extremism is to succeed, the war of words between democratic allies must end, she asserted.The ambassador said Pakistan has taken the first step to restoring normalcy to Pak-US relations by working to reopen the NATO supply routes that were closed after the Salalah tragedy.Additional NATO News; *Link for This article compiled by Roger Smith from reliable sources By Cheryl Pellerin - American Forces Press Service & 'Pak Wants US To Apologise For Salala' - The News*Speaking Image - Creation of DTN News ~ Defense Technology News *This article is being posted from Toronto, Canada By DTN News ~ Defense-Technology News Contact:dtnnews@ymail.com ©COPYRIGHT (C) DTN NEWS DEFENSE-TECHNOLOGY NEWS
Posted by DEFENSE NEWS at 3:35:00 PM