Source: DTN News - - This article compiled by Roger Smith from reliable sources AP(NSI News Source Info) TORONTO, Canada - April 13, 2012: British Prime Minister David Cameron said Friday that he would support suspending the European Union's economic sanctions on Myanmar, which are to be reviewed by the end of the month.
Cameron spoke after meetings with the country's reform-minded president, Thein Sein, and opposition leader Aung San Suu Kyi, a longtime political prisoner who was recently elected to parliament in Myanmar, a former British colony. 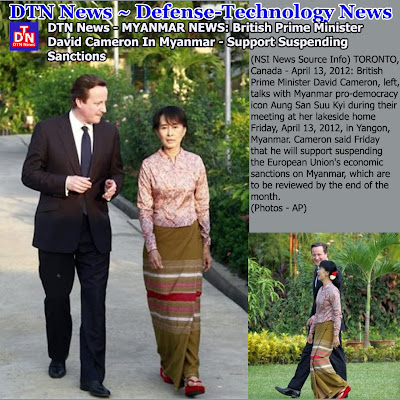 However, Cameron specified that he did not want to see an arms embargo on Myanmar be lifted as part of any easing of sanctions. The embargo, along with economic and political sanctions, was imposed during the repressive rule of the country's previous military government.
"We know there is still much, much more needed to be done, as the president himself has acknowledged, that there are more changes that need to be made," Cameron said at a news conference after meeting with Suu Kyi. "The right thing for the world to do is to encourage the change and to believe in the possibility of peaceful progress towards democracy."
By talking of suspending rather than lifting sanctions, Cameron was making clear the move would be a provisional one that could easily be withdrawn, if judged necessary.
Western nations have held out the prospect of easing sanctions if Thein Sein, a former general who retains close ties to the military, continues the political liberalization he began after taking office a year ago. Foreign investors as well as Myanmar entrepreneurs expect a business boom when restrictions are lifted.
Cameron, speaking with Suu Kyi by his side, told reporters that he had met with Thein Sein and concluded "there are prospects of change in Burma, and I think it is right for the rest of the world to respond to those changes. It is right to suspend the sanctions there are against Burma." He added that the suspension would "obviously" not include ending the arms embargo. Burma is the former name for Myanmar.
Thein Sein's reforms are seen as being mainly driven by a desire for sanctions to be lifted, with those imposing them gradually easing restrictions in return for more reforms, which so far have included the freeing of many political prisoners and reconciliation with Suu Kyi's pro-democracy movement.
If the EU, which is scheduled to take up the issue on April 23, suspends sanctions, it will put pressure on the United States to do likewise, for competitive business reasons. Both the EU and the U.S. restrict investment and trade with Myanmar, along with a slew of more targeted measures aimed at Myanmar military figures involved with repression, and their families and business cronies.
Suu Kyi — who attended Oxford and whose late husband was British — endorsed Cameron's approach.
"I support the idea of suspension rather than the lifting of sanctions because this would be an acknowledgment of the role of the president and other reformers," she said. "This suspension would have taken place because of steps taken by the president and other reformers and it would also make it quite clear to those who are against reform that should they try to obstruct the way of the reformers, then sanctions could come back."
While the international community has applauded political liberalization in Myanmar, it remains concerned about conflict with ethnic rebel groups, who have long been seeking greater autonomy from the central government. The government has been negotiating cease-fires with many, but remains embroiled in a bitter, fitful struggle with the Kachin minority in the country's far north.
As long as such fighting continues, there is no chance the arms embargo will be lifted. However, the failure to do so will affect Myanmar very little, as it had gotten around the embargo for years by buying military items from other suppliers, including China, North Korea and Eastern European nations.
Cameron held talks with Thein Sein soon after arriving in Myanmar's capital, Naypyitaw, and later met separately with Suu Kyi at her home in Yangon during his one-day visit.
His visit is the first in memory by a British prime minister, and it may actually be the first by a serving British head of government since Myanmar obtained its independence from Britain in 1948, when it was called Burma.
Suu Kyi was under house arrest during most of the past two decades under military rule. But as part of her rapprochement with the government, her National League for Democracy party took part in April 1 by-elections to win 43 of the 44 parliamentary seats it contested.
She will head the opposition bloc in parliament when it convenes on April 23, though Suu Kyi's party has suggested that it may delay taking its seats because it finds the wording of the oath of office contrary to its principles. The oath talks of protecting the constitution, which has clauses the NLD considers undemocratic.
Cameron invited Suu Kyi to come to the United Kingdom in June to see her "beloved Oxford" and said that it would be a sign of progress if she were able to leave her country and then return to carry out her duties as a lawmaker. When she was at odds with the former ruling junta, she declined to leave for fear she would be barred from returning.
Suu Kyi replied that "two years ago I would have said 'thank you' for the invitation, 'but sorry.' But now I am able to say 'perhaps,' and that's great progress."
*Link for This article compiled by Roger Smith from reliable sources AP*Speaking Image - Creation of DTN News ~ Defense Technology News *This article is being posted from Toronto, Canada By DTN News ~ Defense-Technology News Contact:dtnnews@ymail.com ©COPYRIGHT (C) DTN NEWS DEFENSE-TECHNOLOGY NEWS
Posted by DEFENSE NEWS at 4:11:00 PM