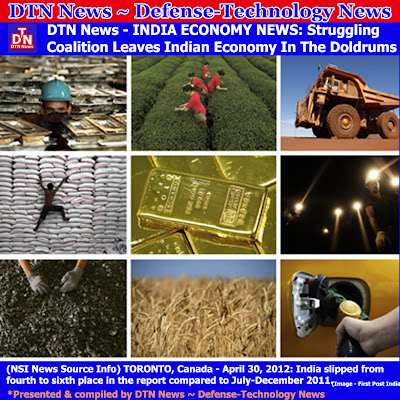 While Dr Manmohan Singh's government has lurched from one crisis to another and serious differences within his coalition have placed almost all reforms on hold, fear of a failed monsoon is the one thing which unites his fractious cabinet and Indian business leaders alike.
In the past few weeks temperatures in New Delhi have plummeted, raising concerns that the searing heat and dust needed for a torrential monsoon will not come, causing crops to fail and inflation to soar once again.
If the weathermen's forecast is correct, India's problem remains a longer term one. How to revive a 'flagging' growth rate of 7pc back towards the double-digit figure the country had in its sights barely two years ago.
According to S&P and Moody's, the root cause of the disappointing performance lies in the country's government. S&P said last week that India's rating could deteriorate further if "the external position continues to deteriorate, growth prospects diminish or progress on fiscal reforms remains slow in a weakened political setting."

Moody's appeared to lay the blame for India's plight at the feet of the Gandhi family which controls the Congress Party, the leading group in the governing coalition. Sonia Gandhi and the party's heir Rahul Gandhi "blew their chance" to revive a programme of reforms in parliament by wasting their time campaigning in the Uttar Pradesh state elections, in which the party was humiliated and the government further weakened.
Prime minister Manmohan Singh had hoped to introduce a series of foreign investment and tax reforms to further open up the country's markets and make it an easier place for foreign and domestic companies to do business. But plans have been mothballed because the governing coalition partners cannot agree.
Plans to reduce government spending on fuel and other subsidies have been halted, while the widely quoted $1 trillion India must spend on upgrading infrastructure from roads to power plants has yet to leave the government's coffers.
A general air of gloom was compounded when the government's chief economic advisor Kaushik Basu warned a Washington think tank not to expect any reforms until a stronger government is elected after the 2014 elections. "We are going through a difficult year. (After 2014), you would see a rush of important reforms and after 2015 India would be one of the fastest growing economies of the world. The new government, if in a majority, would start with the reforms in a big way because there is a sense that it needs to pick up," he said.
In the meantime foreign investors are rejecting India in favour of rivals, while major Indian companies are spurning domestic opportunities in favour of investing overseas, says Subodh Agrawal of Mumbai and London-based Euromax Capital.
He claims clients are afraid of investing in India because they believe its government's decision-making has become increasingly unpredictable. The proposal to allow the government to make retroactive tax demands – after its courts rejected a $2bn tax demand to Vodafone over its acquisition of the mobile operator Hutchison – had made it impossible to sell India to prospective investors.
"S&P and Moody's have been kind to India. Its [real] forecast is doom and doom," he adds.
Jatinder Mehra, a director of the Essar Group, one of India's biggest business houses, says the government has depressed growth by over-reacting to inflation and focusing on curbing demand rather than solving supply problems.
Essar was a major partner in Vodafone India and has also been targeted by the government along with other companies whose 2G mobile phone operator licenses were revoked following corruption allegations. Essar has denied the allegations.
"The Indian economy is in slowdown mode. Last year growth dipped below 6pc, but we have seen 9pc. There is growth but it is slowing down," he says.
Vital investment in the country has contracted and consumption dipped following a series of anti-inflation measures taken in 2010-2011 which pushed interest rates beyond 14pc and reduced liquidity. "Instead of solving the supply constraints, demand was controlled through monetary initiatives, high interest, low liquidity, reduced investment and consumption," Mr Mehra explains.
Government attempts to appease lobby groups have also caused significant problems for the economy. The high inflation it was responding was in fact fuelled in part by welfare programmes for the poor which raised demand without tackling supply bottlenecks, the Essar executive says.
Environmentalist demands to halt coal mining in forest areas have affected the operation and opening of new power stations. "Essar has power plants, we have coal mines, but opening them is an issue," Mr Mehra says. The government's failure to stand up to environmental groups is harming development.
Deepak Talwar, a leading lobbyist and investor in India's hotel sector, says the government is in denial. Official measures to curb inflation have made finance prohibitively expensive and brought infrastructure projects to a standstill. His own hotel investments have been affected.
"The Reserve Bank of India kept raising interest rates and the government doesn't have the strength to say this is wrong for the economy. If you are not a group A borrower you are probably borrowing at 16pc – every project will be affected by that," he says.
The investment needed in roads is not happening because the government is not signing off projects, which means it still takes up to 48 hours for a good truck to drive 1,700 kilometres from Mumbai to Delhi. The problem, Mr Talwar says, is not in the fundamentals of the Indian economy, but in the political leadership above it. Smaller coalition partners are exploiting a gap between the government's real power centre, the Gandhi family, and the administration led by Prime Minister Dr Manmohan Singh.
Poor co-ordination between the Congress Party's political leadership and the government and lack of clear direction is creating a power vacuum. Mr Talwar's solution is to fill it with a Gandhi. "The political leadership must take over the executive. If Sonia Gandhi was prime minister, everyone would fall into line. Or Rahul Gandhi could become prime minister and get this story over with."
Disclaimer statement Whilst every effort has been made to ensure the accuracy of the information supplied herein, DTN News ~ Defense-Technology News cannot be held responsible for any errors or omissions. Unless otherwise indicated, opinions expressed herein are those of the author of the page and do not necessarily represent the corporate views of DTN News ~ Defense-Technology News
*Link for This article compiled by Roger Smith from reliable sources