According to a U.S. Department of Defense news release on contract awards released April 23, the company will produce a total of eight Fire Scouts within an amount not to exceed $262 million. The Navy plans to purchase a total of 28 aircraft under a rapid development effort. 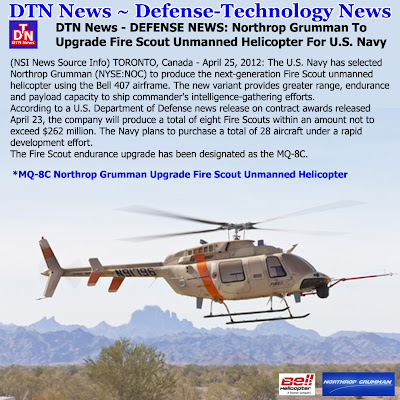 The Fire Scout endurance upgrade has been designated as the MQ-8C.

"Through our company-funded Fire-X demonstration effort we proved that using the mature unmanned systems architecture developed for the MQ-8B Fire Scout paired with the Bell 407 helicopter would provide greater capability efficiently and affordably," said Duke Dufresne, vice president and general manager for unmanned systems. "By using systems that have many years of development already invested in them we can meet the Navy's needs quickly."

Northrop Grumman is the prime contractor for the MQ-8C program. Major suppliers for new variant include Bell Helicopter and Rolls Royce.
Final assembly of the new Fire Scout variant will be completed at Northrop Grumman's Unmanned Systems Center in Moss Point, Miss.