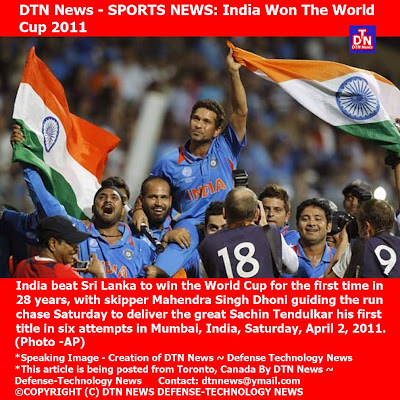 Dhoni scored an unbeaten 91, sharing a 109-run stand with Gautam Gambhir (97) and finishing with a giant six, as India chased down Sri Lanka's 274-6 to win by six wickets in front of an ecstatic crowd at Mumbai.

India became the first team to win batting second in a final since Sri Lanka beat Australia by eight wickets in 1996. The victors passed the 275 target with 10 balls to go.

There was no winning farewell to international cricket for Muttiah Muralitharan, the only survivor from Sri Lanka's '96 winning squad.

Tendulkar didn't get his 100th international century but earned a cherished Cup title and he was lifted onto the shoulders of his teammates for a victory lap.

"It's the proudest moment of my life," he said.

Muralitharan, the leading wicket taker in international cricket, was visibly hampered by niggling injuries that slowed him down and didn't allow him the spring he needs for the extra spin that has bamboozled batsmen for a generation.

The result also made Mahela Jayawardene the first batsman to score a century in a World Cup final and end up on a losing team.

The match tilted twice, with India on top at the start before some late hitting led by Jayawardene helped the Sri Lankans to a challenging 274-6.

Lasith Malinga removed both Indian openers in an express pace opening spell to keep the visitors on track, but India's long batting lineup remained calm enough to keep grinding the target down.

Malinga removed Virender Sehwag, on a leg before wicket on the second ball, and Tendulkar (18) to silence the partisan Indian crowd.

But Gambhir and Virat Kohli (35) combined to revive the innings in an 82-run partnership that took some momentum away from the Sri Lankans.

Gambhir was on 30 and the total at 68-2 when he played an ill-advised shot to Suraj Randiv's third ball and was lucky to survive as Nuwan Kulasekara was unable to take a catch at his feet near the long-off boundary.

Tillakaratne Dilshan broke the partnership, plucking Kohli's leading edge out of the air as he lunged to his right to take a stunning return catch.

Dhoni promoted himself up the order with the total at 114-3 when a captain's steadying influence was required. He passed 6,000 runs in ODIs when he reached 42 and brought up his 50 with a backfoot cover drive against Muralitharan.

Dhoni and Gambhir combined for 118 balls before Thisara Perera finally ended the first century stand of the match when Gambhir succumbed to another rush of blood, stepping down the pitch in a bid to reach his hundred with a boundary, only to lose his middle stump.

That left India requiring 52 runs from 52 balls with six wickets in hand. Yuvraj Singh, named the player of the tournament for his contributions with bat and ball, held his nerve with Dhoni and finished 21 not out.

Earlier, Jayawardene scored a calm and composed 103 from 88 balls to post only the sixth century in a World Cup final.

The 1996 champions made an uncharacteristically sluggish start after winning the toss, the top three of Upul Tharanga (2), Dilshan (33) and Sangakkara (48) slightly misfiring for a rare time in the tournament.

Zaheer Khan bowled impeccably and didn't concede a run in his first three overs, taking a vital early wicket to remove Tharanga as the Sri Lankans crawled to 31-1 in 10 overs. But he was expensive toward the end when Jayawardene brought up his century with consecutive boundaries in the 48th over.

And while he finished as the equal leading wicket taker in the tournament with 21, he'll be disappointed with his last figures of 2-60 after his first five overs cost him just six runs. 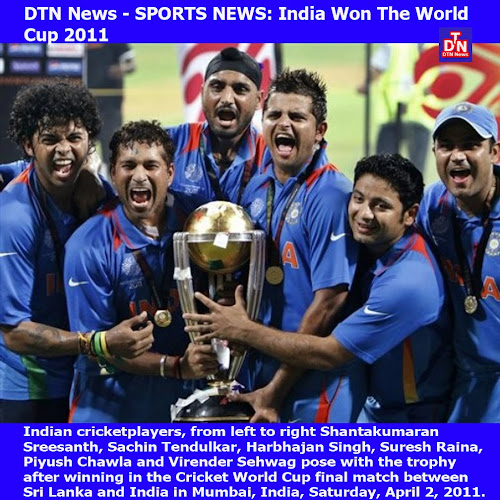 The Sri Lankans scored 63 runs in the last five overs in a batting powerplay, including 24 in the last nine balls.

Nuwan Kulasekera (32) shared a valuable 66-run sixth-wicket with Jayawardene and Thisara Perera pulled Zaheer for six on the final ball to finish unbeaten on 21 from nine balls.

The match started amid some confusion when match referee Jeff Crowe ordered a second coin toss because he couldn't hear Sangakkara's call. Sangakkara won the second toss, a rarity in the international game, and was relieved to be batting first.

Sri Lanka moved from 17-1 to 60 in the 17th over and Dilshan had just taken his tournament-leading tally to 500 runs when he played a Harbhajan Singh delivery onto his stumps.

That brought Jayawardene to the crease, the ex-captain averaging just 33.5 in his previous six overs but the ideal man for the job.

Sangakkara's dismissal, caught behind off Yuvraj Singh, could easily have been a gamechanger.

At 122-3 in the 28th over, India had done much of the hard work, removing three batsmen who were among the five leading scorers in the tournament. But Jayawardene, the ex-captain, marshalled the middle-order and progressively lifted the run rate with a mix of finesse and flourishing boundaries and at least ensured a contest.