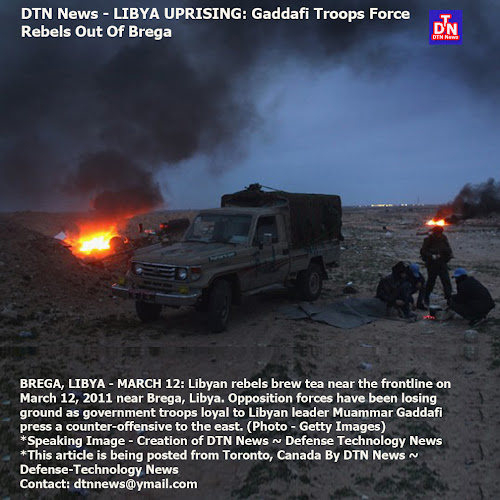 Dozens of rebel fighters pulled out of the area amid heavy shelling.

Libyan rebel forces have been losing ground for days, including the key oil port of Ras Lanuf on Saturday.

In other regional developments:

Rebels left on trucks equipped with anti-aircraft guns retreating from Brega along the coastal road towards Ajdabiya - the gateway to the main rebel-held cities of Benghazi and Tobruk.

They said Col Gaddafi's forces had carried out air strikes, as well as shelling Brega.

Rebels told the BBC they were heading towards Ajdabiya, 150km (93 miles) south of Benghazi.

Col Gaddafi's forces were on the chase, some 60km away from Ajdabiya.

In Benghazi itself the mood remains defiant, says the BBC's Pascale Harter, with many wounded fighters returning but other residents heading for the front line.

Meanwhile reports from the last major rebel base in western Libya, Misrata, say that Col Gaddafi's troops are on the outskirts of the city and tank fire can be heard.

International diplomatic pressure is growing for a no-fly zone to be imposed over Libya.

International diplomatic pressure is growing for a no-fly zone to be imposed over Libya.

The policy would be aimed at preventing Col Gaddafi's forces using warplanes to attack rebel positions, although no clear position has emerged on exactly how this would be achieved.

On Saturday, the Arab League agreed to ask the UN Security Council to enforce such a zone.

The UK and France have pushed for the idea, but have failed so far to win firm backing from the EU or Nato.

Nato has previously cited regional and international support for the idea as a key condition before it could possibly go ahead.

Russia and China, which wield vetos on the UN Security Council, have expressed serious reservations on the issue.