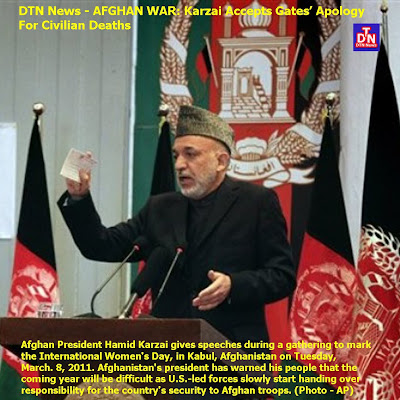 "I would like to begin by joining General Petreaus in offering my personal apology for the accidental killing of 9 afghans boys killed by coalition forces last week. This breaks our hearts," Gates said standing beside Karzai at a press conference. “Not only is their loss a tragedy for their families, it is a setback for our relationship with the afghan people whose security is our chief concern."

Karzai was then asked by a reporter if he accepted the Secretary's apology, seeing as he had just rejected an apology by Gen. David Petraeus just hours before.

"Civilian casualties is an issue that has been for a long time at the heart of some of the tensions in an otherwise very healthy relationship between the two countries," Karzai said. "Secretary Gates is an honored friend of Afghanistan and I trust him fully when he says he's sorry." "We take the apology with respect," he added.

Karzai then invited Gates to dinner at the country’s presidential palace.

Gates is in the country on a surprise visit to talk about the start of the drawdown of U.S. forces later this year and the transition to Afghan control. Gates announced he was sending a team next week to begin negotiating with the Afghan government for U.S. troops to stay beyond 2014, if the Afghans agree.

Civilian casualties have been a persistent problem in U.S.-Afghan relations. The public uproar here over the most recent killings, reportedly of boys gathering firewood who were mistaken for insurgent fighters by the crew of a helicopter gunship makes Gates’ mission more difficult.

Meanwhile, questions about the possibility of the U.S. intervening in the Libyan civil war followed Gates on his visit here. Petraeus greeted Gates on the tarmac in Kabul with a joke about the mounting tensions in the North African country not intended for the camera crews nearby.

As Petraeus shook Gates’ hand, the general could be heard saying, "Well I think you have a bigger plane than normal, you're gonna launch some attacks on Libya or something?

To which Gates laughed and replied, "Yeah, exactly."

Gates waved off the suggestion adding in an exclusive interview with FOX News that "I dont think anybody has any intention of putting any ground forces in Libya."

Even if intended to be light-hearted, the remarks won't be well received in Washington. Secretary Gates and other defense leadershave made clear that the Pentagon is presenting the White House with a range of military options.

Over the weekend Washington continued a heated debate over feasibility and need for establishing a “no-fly zone” over Libya.

Sen. John Kerry, a Democrat from Massachusetts and chairman of the Foreign Relations Committee, said Sunday the U.S. and its allies should consider bombing the country's airports and runways.

White House Chief of Staff Bill Daley, responded later that day by suggesting it's a bigger commitment than some proponents imagine.

"Lots of people throw around phrases of `no-fly zone' and they talk about it as though it's just a game, a video game or something. Some people who throw that line out have no idea what they're talking about," Daley said on NBC’s “Meet the Press.”

"There are other ways around that. In fact, that's what we saw in the no-fly zone in Iraq,” Lapan said in reference to a “no-fly zone” established over Iraq after the first Gulf War in 1991. “Saddam Hussein was able to attack the Shia in the south."

Get the latest Afghanistan updates on this topic page with: