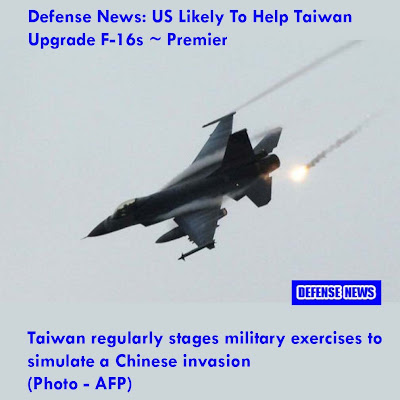 Taiwan has been pressing for the more powerful F-16 C/Ds, saying it badly needs the weaponry as a bargaining chip against its former bitter rival China.

But the fate of a proposed arms deal remains uncertain, Wu said, amid speculation that it could jeopardise Washington's ties with Beijing.

"My understanding is that Washington does not say 'yes' or 'no'. The deal is still under Washington's evaluation," Wu said during a press conference in Taipei.

Wu said that "upgrading the F-16A/Bs is the more likely direction".

The US Congress in 1979 passed the Taiwan Relations Act requiring the United States to provide the island with defensive weapons.

A sale of F-16 C/Ds to Taiwan would be certain to ignite the anger of Beijing, which reacted furiously when the Barack Obama administration in January 2010 announced a 6.4-billion-dollar arms package for the self-governing island.

A furious Beijing suspended military exchanges with Washington in response.

Ties with China have improved markedly since Beijing-friendly Ma Ying-jeou became Taiwan's president in 2008, but China still refuses to renounce the possibility of using force should the island declare independence.