Officials say Sayed Mussa, who faced the death penalty for his conversion from Islam to Christianity, was released Monday, but his whereabouts remain unknown.

February 24, 2011
MORE ON AFGHANISTAN AND: CHRISTIANS AND CHRISTIANITY, KABUL (AFGHANISTAN), INTERNATIONAL COMMITTEE OF THE RED CROSS

The investigation was prompted by an article by Rolling Stone, which described a “psychological operation” ordered in Afghanistan by Lt. Gen. William Caldwell.

U.S. Pulling Back in Afghan Valley It Called Vital

American officials say the Pech Valley consumed resources disproportionate with its importance and there are not enough troops to win decisively against the Taliban and Al Qaeda.

The Department of Defense recently confirmed the deaths of the following Americans.

Now that a multibillion-dollar reconstruction boom in Kabul has created something akin to a skyline, the city is trying to reintroduce the concept of the elevator.

February 21, 2011
MORE ON AFGHANISTAN AND: ELEVATORS AND ESCALATORS,RESTORATION AND RENOVATION, KABUL (AFGHANISTAN)

Reporter's Notebook: In Afghanistan, Glimpses of the Soviet Try

The American outpost at Band-e Sardeh, in Ghazni Province, Afghanistan, lies within the confines of what was once a much larger Soviet Army position. Signs of the prior command remain.

Police officials said 31 were killed when a suicide bomber detonated his explosives at a government office in northern Afghanistan.

February 21, 2011
MORE ON AFGHANISTAN AND: TERRORISM

The Department of Defense has identified 4,429 American service members who have died since the start of the Iraq war and 1,464 who have died as a part of the Afghan war and related operations.

"There was no time to be scared," Sgt. Joshua R. Labbe said of a battle in which everything seemed to be working against an Army platoon fighting in Afghanistan's Baghlan Province.

Defeats and weariness are creating fissures between the top leadership based in Pakistan and midlevel field commanders, who have borne the brunt of fighting.

The ‘Long War’ May Be Getting Shorter

By NATHANIEL FICK and JOHN NAGL

A veteran returning to Afghanistan sees many signs of progress.

As soldiers and police officers lined up at a bank, they became targets of attackers in Army uniforms.

Four NATO service members, four Afghan police officers and 10 civilians, were killed in attacks that showed the tenaciousness of the insurgency even through the winter.

The Treasury Department contends that the New Ansari Money Exchange used billions of dollars transferred in and out of Afghanistan to help hide proceeds from illegal drug sales.

February 18, 2011
MORE ON AFGHANISTAN AND: MONEY LAUNDERING, FRAUDS AND SWINDLING, POLITICS AND GOVERNMENT

By THE ASSOCIATED PRESS

February 18, 2011
MORE ON AFGHANISTAN AND: BANKING AND FINANCIAL INSTITUTIONS,KABUL BANK

Staying in Touch With Home, for Better or Worse

The communication gap that once kept troops from staying looped into the details of home life has all but disappeared. But there are drawbacks to the connectedness.

The findings on problems at the bank jeopardize at least $1 billion in foreign donations to Afghanistan.

No Refuge From Fear in Afghanistan, Even at Prayer

Choices for Afghan parents seeking to educate their children continue to dwindle, as religious schools can turn out to be a training ground for terrorism.

Richard Holbrooke to Be Replaced by Marc Grossman

When the Wave Hits Afghanistan

It's hard to tell an Afghan tribal elder to liberalize his village and let women go to school when he hears of threats to power taking place in other majority-Muslim countries in the Middle East.

The guards, Gul Agha and Lal Mohammed, were being called heroes after they were killed in stopping a bomber from entering a shopping area.

February 15, 2011
MORE ON AFGHANISTAN AND: TERRORISM

Pakistan’s treatment of an American being held in the shooting of two motorcyclists has angered Washington.

The fighting continued for nearly five hours before the police succeeded in killing three of the bombers and wounding and detaining the fourth, officials said. 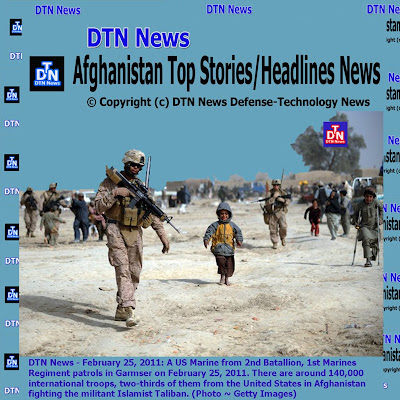 REPORT: BILLIONS LOST ON CONTRACTS IN IRAQ AND AFGHANISTAN

A new report blasts the United States government for wasting tens of billions of dollars in Iraq and Afghanistan by relying too much on contractors and doing too little to monitor their performance.