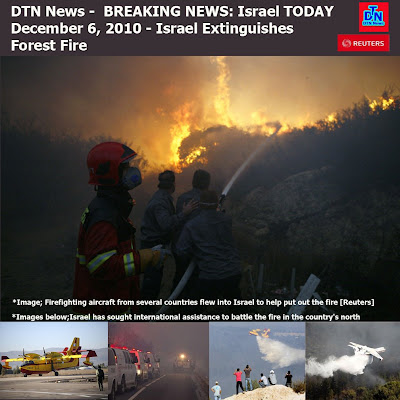 "All of the fires were officially extinguished as of midnight," Mickey Rosenfeld, a police spokesman, said on Monday morning.

Dozens of nations had sent firefighting equipment and helped in the effort to put out the four-day fire, which in addition to causing casualties, scorched 50 square kilometres of woodland, destroyed millions of trees, and an estimated dozens of homes.

Israel has admitted it was woefully underprepared, and politicians have called for officials to resign for failing to quickly quell the fire.

Two teenagers from the village of Isfiya have been arrested on suspicion of starting the blaze "through negligence" by leaving behind burning embers after a family picnic.

Israeli media assessed the cost of the damage at about $550m, and the fire brigade said it would take several days to confirm evacuated areas were safe.

Binyamin Netanyahu, the Israeli prime minister, pledged to compensate victims and rebuild the area "in the quickest possible way".

"I don't want delays. I don't want red tape. I want processes to be shortened and rapid solutions," he said after he was given a tour of the area in a Boeing 747 Supertanker, the world's largest water-bombing plane, leased from a private US company.

Most of those killed in the fire were prison officers whose bus was trapped by the flames as they were travelling to help evacuate a nearby jail.

US fears on Taliban cash revealed

A scramble for the Arctic
With one fifth of the world's oil and gas at stake, countries are struggling to control the once-frozen arctic.

My aunt the revolutionary
Hana al-Shaibani gave up her comfortable life in 1960s Baghdad to live in a refugee camp and fight for the PLO.

South Sudan braces for trouble
In the religiously mixed border towns residents fear they will be on the frontline of any post-referendum violence.
What's Hot