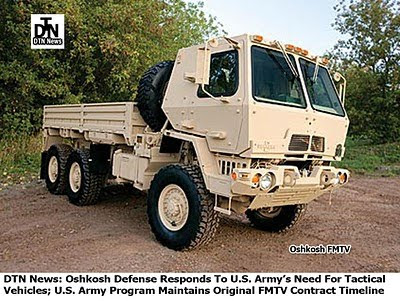 e Info) OSHKOSH, Wis. - August 16, 2010: Oshkosh Corp., Oshkosh, Wis., was awarded on Aug. 12 a $201,545,286 firm-fixed-price contract. This contract is for the production of 1,288 Family of Medium Tactical Vehicles.
Work is to be performed in Oshkosh, Wis., with an estimated completion date of March 31, 2012. Bids were solicited on the World Wide Web with three bids received.
TACOM LCMC, Warren, Mich., is the contracting activity (W56HZV-09-D-0159).
Oshkosh Defense - FMTV; The FMTV is no exception. Oshkosh will use its expertise, proven production capabilities and superior vehicle technologies to meet the demands of the FMTV’s 17 models and 23 variants in the field.
On February 27, 2009, the United States Army Tank Automotive and Armaments Command issued a solicitation for the upcoming round of FMTV procurement. BAE, Oshkosh Defense (a division of Oshkosh Corporation), and Navistar submitted proposals by the May 27 closing date.
Oshkosh Defense won the award on August 26, 2009. Navistar and BAE were debriefed on September 2 and 3, respectively, after which time both companies protested the award.
On December 14, the U.S. Government Accountability Office upheld the protests, but on February 12th the United States Army again awarded the contract to Oshkosh Defense.
On 11 May 2010, Oshkosh reported a trucks and trailers delivery order from the Army valued at more than $410 million for the production and delivery between March and December 2011 of 2,634 Family of Medium Tactical Vehicles (FMTV).
To date, Oshkosh Defense has received orders valued at more than $690 million under the five-year FMTV requirements contract.
Oshkosh is committed to continuous innovative engineering, with a Long Term Armor Strategy-compliant cab and other advanced technologies availble to help the FMTV keep pace with the modern battlefield.
For the ultimate in effectiveness, reliability and mission confidence, go with the leading provider of both medium and heavy military-grade vehicles. Look to Oshkosh Defense, and get going.
The mission success of today’s Warfighters calls for maximum performance from the equipment they rely on. Oshkosh Defense designs, manufactures and delivers tactical wheeled vehicles with these rigorous expectations in mind - supplying each vehicle on time, on budget, to spec – for the most effective response. Every time.
Posted by DEFENSE NEWS at 10:22:00 PM