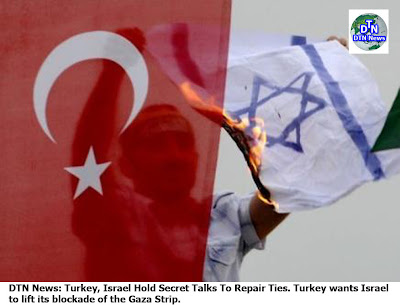 -bound aid ships, officials said Thursday, as the United States welcomed the effort.
Turkish Foreign Minister Ahmet Davutoglu and Israeli Trade Minister Benjamin Ben Eliezer met Wednesday in Brussels, where Davutoglu was on a visit to discuss his country's EU membership bid.
Davutoglu said he insisted for an apology over the raid, stressing that Ben Eliezer requested the talks as an envoy for Israeli Prime Minister Benjamin Netanyahu.
It was the first ministerial meeting since relations between the one-time allies plunged into deep crisis when Israeli commadoes stormed a Turkish ship leading an aid flotilla to the Gaza Strip on May 31, killing nine activists. "Israel has been seeking contact -- through direct and indirect ways -- ever since," Davutoglu said in parliament.
"Ben Eliezer came as a special envoy of Israeli Prime Minister Netanyahu and asked for the meeting, saying he was bringing a message from Netanyahu," he said.
"The issue of an apology and the other issues... were conveyed to them directly... We are determined to take any measure and implement any sanction, depending on Israel's attitude," he added.
Davutoglu told Ben Eliezer that Turkey expected Israel to apologise over the bloodshed, compensate the victims' families, agree to an international inquiry into the raid and end Gaza's blockade, foreign ministry spokesman Burak Ozugergin told AFP.
The United States, alarmed over the rift between its two main allies in the Middle East, was reportedly involved in organising the meeting.
Turkey's Hurriyet daily said "the ground for the secret talks was laid" last week when Prime Minister Recep Tayyip Erdogan met with US President Barack Obama in Toronto. Ozugergin declined to comment on the report.
Washington had said earlier it was working to heal the Turkish-Israeli rift amid fears that Turkey, NATO's sole mainly Muslim member, was sliding away from the West.
US State Department spokesman Philip Crowley welcomed the secret talks.
"We certainly support this kind of dialogue that hopefully can help repair the fractures that have existed in recent weeks and months," he said Thursday.
"A relationship between Turkey and Israel is not only in the best interest of the region, it ... supports our interests in the region as well," he added.
An official at Netanyahu's office confirmed that Ben Eliezer held talks Wednesday with "a Turkish official."
The talks sparked tensions in Israel as it emerged that Netanyahu gave the go-ahead for the meeting without informing hawkish Foreign Minister Avigdor Lieberman.
Eight Turks and a dual US-Turkish citizen were killed in the raid on the Turkish Mavi Marmara ferry.
Ankara recalled its ambassador from Tel Aviv and cancelled three planned joint military exercises following the raid. It also twice denied permission to Israeli military aircraft to use its air space.
Bilateral ties had already been strained since Israel's devastating war on Gaza last year, which triggered vehement criticism from the Islamist-rooted government in Ankara.
Ben Eliezer is known as an advocate of good ties with Turkey. He was the first Israeli minister to visit Ankara last year, after the Gaza war began to poison ties.
"Ben Eliezer has always been a one-man Turkish lobby -- he is someone they trust, with whom they have had long-standing ties, so it makes sense," an Israeli official said on condition of anonymity.
"Having another minister step in is one thing, but doing this without informing the foreign minister -- that is really offensive," he said.
Lieberman's office slammed the incident as "an insult to the norms of accepted behaviour and a heavy blow to the confidence between the foreign minister and the prime minister."
The meeting was held in a hotel suite and lasted more than two hours, Turkey's NTV news channel said, adding that it was kept secret also from two Turkish ministers who were in Brussels with Davutoglu.
Turkish-Israeli ties had flourished for years after the two countries signed a military cooperation accord in 1996.
Posted by DEFENSE NEWS at 4:26:00 AM